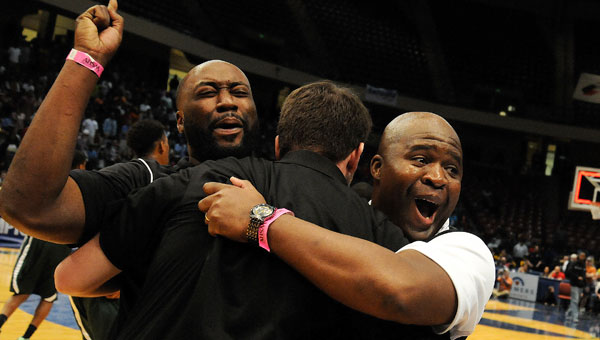 BIRMINGHAM — Dallas County forward William Lee is going out on top, with a state championship trophy he dreamed about and a performance for the ages.

Lee hit a three-pointer at the end of regulation to cap a Hornets’ rally from 13 points down in the fourth quarter and then made game winning free throws in overtime to lead Dallas County (29-3) to a 51-48 win over J.O. Johnson (25-6) in the Class 4A championship game.

The UAB signee delivered in the game’s clutch moments, adding a championship trophy to a legacy that already includes winning the 2013 Class 4A Player of the Year award and holding the national record for blocked shots in a game.

When Dallas County — a team that has lacked depth this season — had starting guards Jerrod Moorer and Raheem Phillips foul out in the fourth quarter, the Hornets’ odds of taking home the school’s first basketball championship appeared bleak. To counter the loss of two of his most dependable players, Hornets head coach Willie Moore turned to his senior big man and told him it was time for him to shine.

Lee, who won the Class 4A tournament MVP with a 22 point, 13 rebound, seven block performance, delivered with the game on the line.

In the extra session, the game was tied 48-48 with less than twenty seconds remaining. Moore called up a play for Lee, who was fouled on a three-pointer with 5.4 seconds left.

Lee made all three free throws, the Hornets got a final stop, and the celebration was under way.

For a while, it looked like there would be no celebration for the Hornets. J.O. Johnson led nearly the entire game after taking command early on.

In a slow first half that saw both teams methodically run their offense, the Jaguars were in front most of the way. J.O. Johnson took advantage of seven first half Hornets’ turnovers and had a commanding 19-11 lead at the break.

The third quarter was a lot of the same. Dallas County closed to within 21-16 early in the quarter, but the Jaguars responded with an 8-2 run to close the quarter.

Lee said he started to wonder if it just was not the Hornets’ day.

“Yeah, I was thinking that in the third quarter,” Lee said. “We just found a way to come back and win.”

The Jaguars had a 31-18 lead after the opening possession of the fourth quarter but Dallas County slowly started to chip into the lead.

“We wanted it more than they did,” Lee said, when asked what changed in the fourth quarter.

Moorer, who scored 13 points, had a three-point play to bring the Hornets within nine with 6:21 remaining in the fourth quarter.

After a layup by Lee and a block that he saved and knocked out of bounds off of a J.O. Johnson player, Dallas County’s Kendell Motley made a layup with 4:07 remaining to make the score 34-30 Jaguars.

Moorer picked up two fouls in nineteen seconds and fouled out with 2:50 left in the game, leaving the Hornets without their second leading scorer.

After he fouled out, Moorer made sure to fill his teammates with confidence.

“I told William we were going to win,” Moorer said. “I have faith in my teammates.”

J.O. Johnson’s Lionel Love made a layup with less than two minutes to play in the game to give the Jaguars a 39-32 lead.

Lee answered with a jumper and then Scott Cole, who was playing because Moorer fouled out, knocked in a three-pointer with 1:07 remaining in the fourth quarter.

After J.O. Johnson knocked in a free throw, Phillips made a layup to pull the Hornets within 41-38, but fouled out on the inbounds pass with 29.1 seconds left.

After the foul, J.O. Johnson’s Jordan Logan knocked in two free throws to give the Jaguars a 43-39 lead and it looked like the game might have been over.

Instead, Lee scored on a turnaround jumper with 9.8 seconds left to bring the Hornets within 43-41 and after an inbounds pass J.O. Johnson’s Lionel Love was fouled with 7.4 seconds left.

Love made the first free throw and had a chance to salt the game away with a second made free throw, but missed.

Lee got the rebound, brought the ball up the floor, and knocked in a three at the buzzer to tie the game, which sent the Hornets’ crowd into a frenzy.

“He makes those in practice but to see him actually make one in the game was huge,” Moore said.

The three kept Dallas County’s season alive and in overtime the Hornets sealed the deal.

Tavon Muse gave Dallas County the lead on a score to begin the extra session but the Jaguars answered with a layup to tie the game 46-46. The Jaguars Damione Freeman threw down an alley oop to give J.O. Johnson a 48-46 lead but Lee responded a jumper to tie the game 48-48 with 2:12 left in overtime.

J.O. Johnson seemed set to hold the ball for the final shot in overtime, but Dallas County poked the ball free and Muse dove to the floor and Moore called timeout with 22.4 seconds on the clock.

On the next possession, Lee had the ball and was double teamed, but he dribbled through the two Jaguars defenders and was fouled on a desperation three-point attempt with 5.4 seconds left in overtime.

“Coach wanted me to take the last shot,” Lee said, smiling. “I lost track of time.”

It worked out, because Lee made all three free throw attempts and the Jaguars missed a potential game tying three as time ran out.