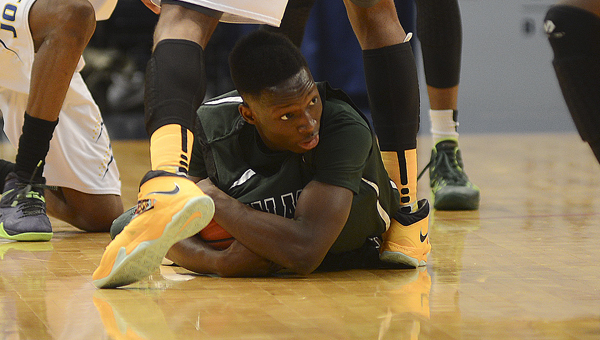 Dallas County’s Travon Muse dives on the floor and corrals a loose ball with 22 seconds remaining in overtime. Head coach Willie Moore immediately called timeout, giving the Hornets possession of the ball. On the ensuing possession, William Lee was fouled and knocked down the game winning free throws.–Daniel Evans

BIRMINGHAM — Since an injury sidelined guard B.J. Leshore in November for the remainder of the season, Dallas County has regularly cycled through six players that see playing time on a consistent basis.

Saturday in the Class 4A boys’ championship game against J.O. Johnson, the Hornets found themselves in foul trouble and in need of help from their bench.

Foul trouble was one of head coach Willie Moore’s biggest concerns coming into the game, considering the lack of depth the Hornets have had this season, but his message with his team this week had been all about opportunity.

When guards Raheem Phillips and Jerrod Moorer fouled out, Scott Cole and Travon Muse entered the game and provided impactful plays in the fourth quarter and overtime.

First, it was Cole, who hit a big three-pointer to get the Hornets to within three with 1:07 remaining.

Then, it was Muse, who dove on the floor with 22 seconds left in overtime and gave Dallas County possession — which resulted in William Lee’s three free throws that decided the game. The Hornets held on for a 61-58 win.

“It was a total team effort,” Moore said.

McGuire, who regularly fills the role of Dallas County’s sixth man, played 27 minutes in the game and scored three points on 1-for-5 shooting.

Cole played five minutes and Muse played four, but the duo shined in two of the game’s biggest moments.

In the last three games in Birmingham and Montgomery, Cole played a total of seven minutes and didn’t score on only one shot attempt.

Saturday he only attempted one shot as well, but the three-pointer kept the Hornets in the game.

Muse had only played one minute in the last three games. All three minutes came in the Hornets’ blowout win over Dora, but he did hit a three-pointer in that game in his limited action.