Dallas County’s William Lee isn’t the only Hornets’ big man that has been recruited by schools all over the country. 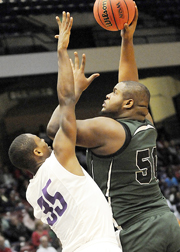 Hornets center Lowell Furlow, who like Lee is listed as 6’9”, has drawn interest from several Division I football programs, but right now he’s making his presence known on the basketball floor.

Furlow, a junior, was inserted into the lineup when senior guard B. J. Leshore went down with an Achilles injury in December. The Hornets had to adjust the way they played, slowing the pace and using the height advantage Furlow and Lee had over opponents inside to score and control tempo.

“That’s where our biggest advantage is at in the post,” Furlow said. “We play big man ball down there.”

As the season has progressed, Furlow’s confidence has grown and he has developed into a significant starter for the Hornets.

Dallas County head coach Willie Moore said Furlow has improved as much, if not more than any player on his team this year.

“Lowell has improved tremendously and certainly we wouldn’t be the team we are now without him and the things that he has done over the course of the season,” Moore said.

Lee said Furlow’s improvement has come from Moore pushing him in practice.

“It’s mental,” Lee said. “He could have been doing that all along. Coach has been getting onto him about every little thing … I think that helped him a lot.”

Furlow is also excelling on the football field.

Before focusing completely on football again, Furlow hopes to help the Hornets win their first basketball championship when they take on J. O. Johnson Saturday at 11 a.m.