Editor’s note: Below is a sample resolution that could be used to name the Valley Creek Bridge in honor of Commander Howard W. Gilmore, a Selma native and recipient of the Congressional Medal of Honor.

Whereas, Howard Walter Gilmore was born in Selma, Alabama on September 29, 1902.

Whereas, Howard Walter Gilmore began a career as an enlisted sailor and later by competitive examination entered the U.S. Naval Academy graduating 34th in a class of  456 in 1926. 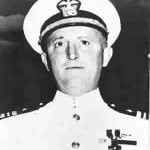 Whereas, Howard Walter Gilmore was assigned as executive officer of the submarine USS Shark (SS-174) before the war and took command of the USS Growler (SS-215) four months after the attack on Pearl Harbor in February 1942.

Whereas, Howard Walter Gilmore did distinguish himself as a submarine commander  destroying Japanese vessels near the Aleutian Islands, East China Sea near Taiwan, and between Turk and Rabaul in the Bismarck Archipelago during the early phases of World War II.

Whereas, on USS Growler’s fourth and fateful war patrol disrupting shipping lanes from Turk to Rabaul the night of Feb. 6-7, 1943, Commander Gilmore, while surfaced charging batteries, sighted the 900 ton provision ship Hayasaki, manned the bridge for a surface attack, and during close proximity rammed the Hayasaki amidship at 17 knots extensively damaging 18 feet of the Growler’s bow.

Whereas, the Japanese crew of Hayasaki unleashed a murderous assault of machine gun fire raking the Growler’s deck killing the assistant officer of the deck and a lookout, wounding Commander Gilmore and two others in the midst of Gilmore’s command to “Clear the bridge!”

Whereas, realizing he couldn’t make it to safety in time to save the ship, Commander Gilmore heroically ordered the executive officer to “Take her down!” after the deck crew was safely in the conning tower with himself clinging to life on a railing facing certain death of injuries and drowning.

Whereas, Commander Gilmore demonstrated exemplary courage and sacrifice to save his ship and crew earning the Congressional Medal of Honor posthumously for his selfless actions and heroism becoming the first WW II submariner and only Medal of Honor recipient claiming Selma as his place of birth.

And whereas, there is nothing in Selma named in honor of our only Medal of Honor recipient and home town hero.

Be it Resolved, we fully support the naming of the Valley Creek Bridge the Commander Howard W. Gilmore Memorial Bridge.

Dr. Avis Williams: Spring is in the air