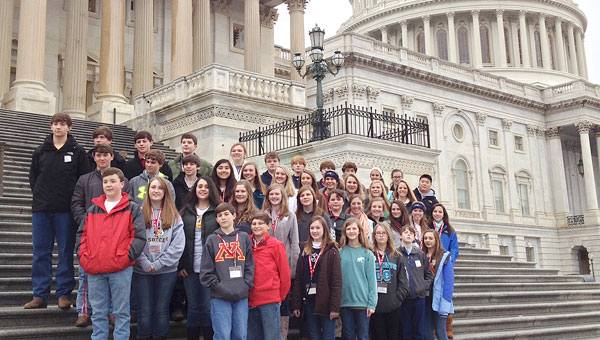 Students from Morgan Academy pose for a photograph in front of the U.S. Capitol Building in Washington, D.C. earlier this month.

A week in Washington D.C. earlier this month has left the eighth grade students at Morgan Academy with a collection of memories they won’t soon forget.

The eighth grade class spent the majority of their six-day trip checking a bevy of items off their must-see list, and Morgan Academy history teacher Patty South said she could see the pride the students developed for their country over the course of the adventure.

“It was pretty jam packed field trip and it really made them proud to be Americans,” South said. “They really enjoyed the Korean Memorial and the Vietnam Memorial, as well as the new Martin Luther King Jr. Memorial.”

South said this was the third year eighth grade students have traveled to the nation’s capital, providing the students a chance to see things in person that they have covered in their American History class at Morgan.

Ann Elizabeth Yocum said the architectural beauty of a few places the class visited, along with the size and hectic nature of Washington D.C., were just a few of the things that struck her during the trip.

“I loved the architecture in the Cathedral and at the Naval Academy,” Yocum said. “And I’ve never been in a big city like that before, so it was neat to see people walking and running around. It was really just like being in a movie.”

For eighth grade student Sam Plummer, the highlight of the week away was a boat trip the class took that gave them a unique view of the historic city.

“We had a cruise and it was really cool when we were on the boat because we could see all the monuments and buildings,” Plummer said.

If there was one drawback to seeing sights such as the National Cathedral, the Library of Congress, U.S. Capitol Building, Smithsonian Museum and the National Mall, students and teachers agreed it was the bus ride, especially for those on the bus with no working televisions.

But even with the two days spent in buses, the students were clear the trip had been a more than positive experience.

“The bus ride was long,” eighth grade student Alek Poe said afterward. “But it was worth it when we got to see things like the Korean War Memorial and all of the names on the Vietnam Memorial.”