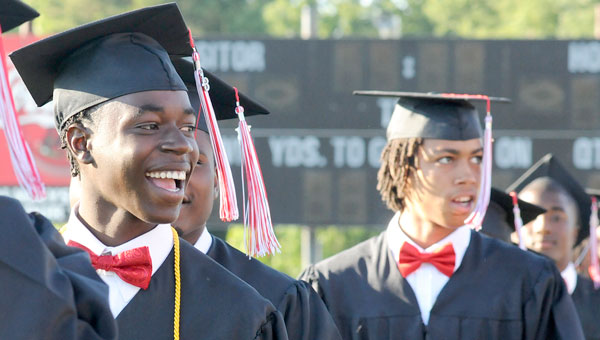 The Alabama State Department of Education has released data that shows the graduation rate of Alabama High School students has met the department’s goal of 80 percent years earlier than expected.

Although not yet at 80 percent, local schools are performing better than in recent years.

“Not only is the increase significant for our students, but it’s significant for our state’s long-term economic impact as well. More students graduating from high school means more students going to college, starting careers and becoming productive, tax-paying citizens,” state superintendent Dr. Tommy Bice wrote in a news release. “High School graduates are much less likely to be unemployed or underemployed, less likely to receive public assistance and less likely to end up on the wrong side of the criminal justice system.”

He said high school gradation rates have increased within Dallas County Schools as well. Overall, the graduation rate in the county in 2012 was 71 percent, while the 2013 rate was 73 percent.

Willingham said the Dallas County School System is making an effort to encourage students within their school district to stay in school.

“We develop and they develop with the parents and the team a four-year plan for the child,” Willingham said. “You have to monitor and make sure they are on pace to do exactly what the plan said. If there is anything going wrong, maybe a child struggling, losing interest in that course of study, you can talk about the adjustment to be made.”

Southside High School showed the biggest improvements between 2012 and 2013. In 2012, Southside saw a graduation rate of just 56 percent, but recorded an 86 percent graduation rate in 2013.

“I can’t even put into words how important it is to get an education,” Willingham said. “I wish everybody we see would graduate from high school and go to a career or trade, and our whole town and the world would be a much better place.”

Keith High School’s graduation rate in 2012 was 56 percent, but showed improvement in 2013 with 70 percent graduation.

Calls left for Gerald Shirley, superintendent of education for Selma City Schools, were not returned.