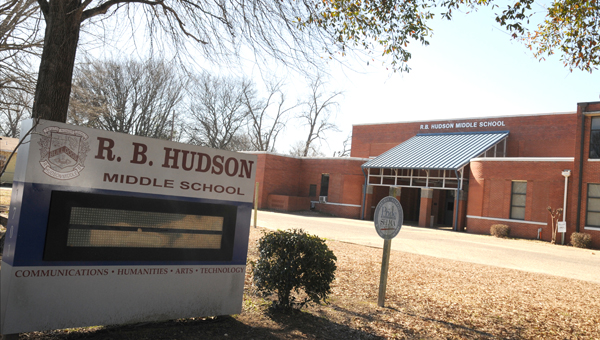 Room for improvement: R. B. Hudson Middle School was the only school in the Selma City School System to declared a ‘failing’ school by the Alabama Department of Education.
(Josh Bergeron | Times-Journal)

Five Selma area schools were declared failing this week by the Alabama Department of Education.

Four of the schools were in the Dallas County School System — Brantley Elementary, Keith Middle-High, Southside High and Tipton Durant Middle. R.B. Hudson Middle School was the only one from the Selma City School System named.

Schools are named failing if they rank in the lowest 6 percent in the state for three of the previous six years. The rankings are based in part on test scores from the previous year.

Dallas County Superintendent of Education Don Willingham reacted to the news by saying he and his staff are actively working on improving the system, as two of the county’s four schools are one year from being removed from the list.

“Across the board I want to raise the bar a little bit and place the emphasis on our priority schools,” Willingham said. “We are bringing some new technology into the system and assigned supervisors to each of the priority schools to work closely with the instructional programs at those schools.  We are seeing first hand the progress being made.”

Dallas County’s four priority schools are identical to the failing schools, as defined by the Alabama State Department of Education.

“When we got the announcement last year at this time, there was nothing Brantley or Southside could do this past year to get off the list,” he said. “We could have set world achievement records and still been considered a failing school, because they were in the lowest six percent previously. We just have to make sure that progress is sustained.”

Keith Middle-High School and Tipton-Durant Middle School may be on the list for years to come as they have both been in the bottom six percent for all of the previous six years.

R.B. Hudson Middle School is in a similar situation. It has been in the lowest six percent since 2008.

Selma City Superintendent of Education Gerald Shirley sent the Times-Journal a statement about changes made to move the school off of the list.

Shirley said the system hired a new principal and reading and mathematics curriculum specialist. He said monthly support meetings are also held with representatives from the Alabama State Department of Education.

Because schools receive a portion of funding based on student population, the Dallas County School System could see a loss in revenue as students take advantage of the Alabama Accountability Act.

The act allows students in failing schools to transfer to another school in the system or a neighboring system. Students can also use a $3,500 tax credit to offset tuition at a private school.

Willingham said the amount of transfers is unlikely to significantly change revenue. During the current school year, the first under the act, 18 students in Alabama transferred to a neighboring system and 52 in the state used the tax credit to attend a private school, according to the Department of Education.

“That’s not really a concern. We hope to keep all of our students,” Willingham said. “If it was a mass move, it would be a financial hardship.”

Though four of his schools are listed as failing, Willingham said he isn’t looking at the rankings as a negative.

“We have taken it as a challenge,” he said. “We realize in some of those schools, no matter how much progress they show, they will still receive the same ratings by the rules we are going by, but we are still taking it as a personal challenge to show progress each year.”