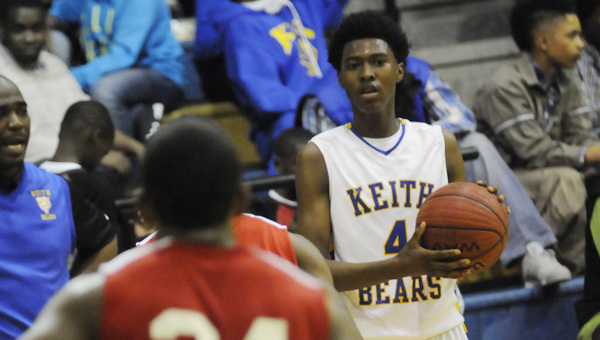 Keith’s Anfernee Simmons looks to pass in Friday night’s game against Southside. SImmons scored 23 points in the game as the Bears survived a late Panthers rally for a big win.–Daniel Evans

Southside nearly rallied from a 20-point deficit to shock Keith Friday night, but the Bears were able to hang on for a 57-52 victory.

The Bears led 45-25 with 3:03 remaining in the third quarter after Anfernee Simmons dunked on an alley-oop pass from Walton Young and the game appeared over, but Southside rallied and turned a laugher into a close contest in the final minutes.

“It was an ugly win, but I’ll take the win,” Keith head coach Tommy Tisdale said. “This game showed us some things that we need to improve.”

The Panthers pulled within 54-52 with 2:35 remaining in the fourth quarter on two free throws from Jevon Hall. The game’s next sequence of events ended up having a decisive impact on the outcome. Southside‘s Devante Alexander stole the ball and was called for a travel after tripping and sliding to the floor and Panthers head coach Cedric Brown, reacting to the call, ran outside the bench area and was called for a technical foul.

“That technical foul was big because it took the guys out of a little momentum that they had going and I’m lost for words because it is a kids game,” Brown said. “I think officials should stay out of the game when it is that close. Let the kids decide [it].”

The play resulted in Walton Young making one of two free throw attempts to give Keith a 55-52 lead and on the ensuing Bears possession, Simmons made a layup with 1:26 left to stretch Keith’s lead to 57-52.

From there Keith held on, thanks to a couple of Southside miscues that resulted in turnovers.

“I thought we played pretty decent in spurts in the second quarter and basically through the third,” Tisdale said. “In the fourth quarter we got outplayed from start to finish. We got outhustled. “

In the first half, it appeared as though Keith had survived an early Panthers’ storm. Southside jumped out to an early 8-1 lead, but Simmons brought the Bears back with a barrage of threes. Simmons ended up scoring 11 points in the opening quarter, which ended with Keith ahead 19-14.

The lead swelled in the second quarter as Keith controlled the action. After trailing 8-1, the Bears went on a scoring run of 40-15 to take a 41-23 lead into halftime.

The second half appeared to be much of the same until the Panthers found a spark, seemingly out of nowhere. Trailing 47-30 after the third quarter, Southside started the fourth quarter on a 11-2 run to jump right back into the game. A three-point play by Hall brought the Panthers within 52-46 with 5:42 to play and four free throws later the score was 54-50. Keith was able to hang on in the end, with Simmons’ layup delivering the deciding blow in a game between the two county rivals.

Southside will play its third game in three nights at Dallas County Saturday night. Keith’s next game is Monday at Maplesville, before the Bears host the Hornets Tuesday night.

The Bears recognized that Southside’s primary ballhander — Kionna Likely — was sitting out the game due to unspecified reasons and took advantage, using a full court press defense to turn a tight game into a blowout in the second quarter.

“I noticed that their best ballhandler didn’t play tonight so I felt applying the pressure to make somebody else handle it would be an advantage to us,” Keith head coach Cecil Williams said.

Keith led 12-6 after the first quarter, but locked down defensively and rolled to a 32-9 halftime advantage.

“Having a primary ballhandler on the floor is very important just to the overall production of our offense but tonight we were trying to find that step-up person. That person that was going to step up, step in and be a leader on the team,“ Southside head coach Jason Bothwell said.

Early on in the game, the Panthers played a box-and-one defense on Bears’ guard Harriet Winchester and it allowed some of the other players a chance to step up and score. Winchester was held to nine points, but Zykia Pettway scored 18 points and ten Bears’ players scored in all.

“That is kind of an advantage to us and it kind of helps us out a lot when they do that,” Williams said about teams playing box-and-one defense on Winchester. “They focus on her so much that it gives the other players a chance to play and showcase their skills.”