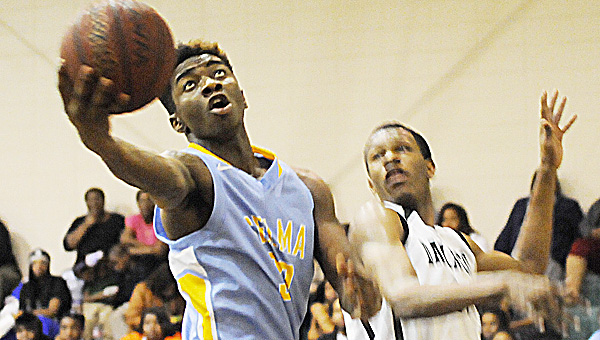 Selma’s Michael Griffin goes up for a layup in Thursday night’s game against Dallas County.–Daniel Evans

The Hornets (14-3), ranked No. 4 in Class 4A in the latest ASWA poll, played their first home game since Nov. 15 against John Essex — a stretch of 15 straight road or neutral court contests. Lee, the UAB signee, had one of his best all-around performances of the season with 28 points, 13 rebounds and 10 blocks.

Dallas County head coach Willie Moore was impressed by Lee’s performance, but he felt his team was lacking effort most of the night.

“We have the best player but we do not have the best team,” Moore said, adding later that he felt his team played very lackadaisical.

Moore said that he feels like at times his team takes Lee for granted and plays sloppy.

“William is the best player in the state and I feel sorry for him that he is playing on this team that doesn’t respect him like they should,” Moore said.

Although Moore wasn’t happy with his team’s performance, the Hornets controlled the game from the opening tip thanks to Lee’s outstanding night.

The Hornets led 21-13 twelve minutes into the game and at that point Lee had already recorded 11 points, five rebounds and four blocks on his way to a triple double.

The lead would remain at ten the rest of the half, with the Hornets leading 27-17 at the break.

The Saints (10-9) pulled within 29-21 early in the third quarter, but Dallas County’s Jerrod Moorer hit a three pointer and Lee followed with a layup through contact to make the score 34-21.

Late in the fourth quarter, the lead ballooned to 59-42 before Selma’s Keyshawn Ford made two shots in the final seconds to bring the score a little closer.

“We got caught up in the moment,” Jackson said.

Jackson said the deficit his team faced was manageable throughout, but the Saints were unable to make a run to close the gap.

Keyshawn Ford led the Saints with 12 points and four rebounds in the game. Moorer scored 14 points for Dallas County.

Selma (15-4) used an all-around team effort Thursday night to pull away from Dallas County 56-10 and continue its oustanding season.

Eleven different players scored for the Saints in the game and all fifteen players saw some time on the court.

“We got a chance to play everybody We played fifteen kids and I think everybody made a contribution,” Selma head coach Anthony Harris said.

The Lady Saints led 32-0 at one point in the second quarter and took a 40-9 lead into halftime.

The Saints were up 51-10 after the third quarter.

Selma was led by Ayana Moore who had 12 points, five assists and four rebounds.

Senators pull away from Autauga

Behind a big night from Dalton Lee, Morgan Academy defeated Autauga Academy to get back to .500 on the season.... read more