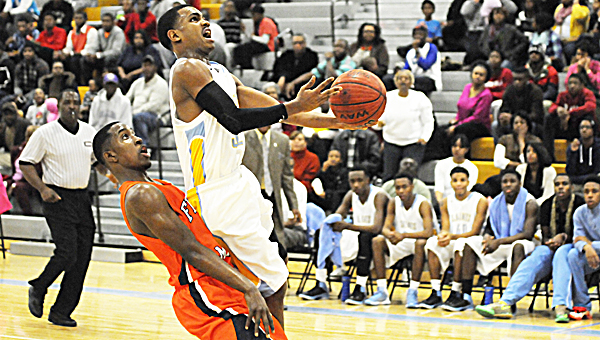 Selma’s Keyshawn Ford goes up for a layup while a Francis Marion defender tries not to foul him. Ford led the Saints with 14 points in the game, but the Rams won the game 49-48. Selma’s next game will be Tuesday, Jan. 7 against Demopolis. –Daniel Evans

With a milestone in sight, everything seemed to be in place for Selma head basketball coach Woodie Jackson’s career to come full circle.

The Saints took on Francis Marion — the school Jackson coached to five of his six state championships— Friday night at Selma High School with the coach looking for his 700th career coaching victory.

But the Rams apparently didn’t get the message, as they led most of the game and held off a late Selma run for a 49-48 win that will keep Jackson on 699 victories for at least a few more days.

“We just weren’t ready to play,” Jackson said. ”They outhustled us all evening. [We] weren’t focused.”

Francis Marion head coach Johnny McCalpine said this is a huge win for his team, especially after the Rams fell to Selma earlier this year 71-58.

“It is a big win,” McCalpine said. “This is a 5A school against a 2A school and they have one of the best coaches ever. “

McCalpine was proud of the way his team started the game, because the last time the Rams took on the Saints they were down big from the opening tip.

“The difference in the game was we just didn’t get down the from the start,” McCalpine said. “The first time we played them we got down by about 18 points right from the start.”

Marion led 7-6 after a sloppy first quarter and 17-15 at halftime and controlled the game most of the second half as well, but the Saints wouldn’t go away.

After trailing the majority of the night, Selma rallied to take a 37-34 lead in the fourth quarter after a layup by Keyshawn Ford, but the Rams’ Arthur Johnson led Marion back with a three-point play and two free throws. Ford responded with another layup to tie the game 39-39 with 3:28 left to play, but Johnson and Juan Brooks scored back to back baskets to stretch Marion’s lead to 45-40.

Selma responded with two free throws from Ford, who led the Saints with 14 points, to make the score 45-42. An intentional foul called on Selma before the ball was inbounded allowed the Rams to extend the lead to 47-42 with 44.1 seconds left. Ford nailed a three to bring the Saints within 47-45, but Johnson made two free throws to make it 49-45 Rams with just a few seconds left.

Selma’s Alfred Robinson hit a three as the buzzer sounded to make the score 49-48.

Selma’s next game is against Demopolis Tuesday, Jan. 7.