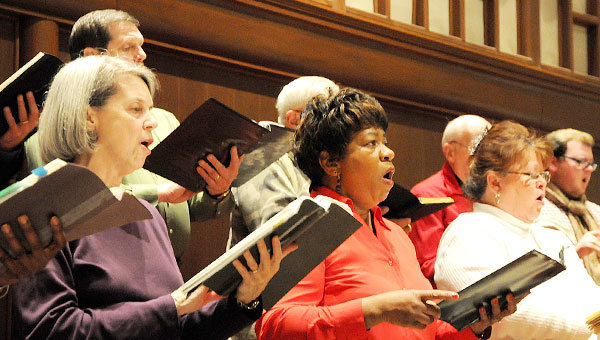 The Selma Choral Society rehearses The Messiah for the final time on Monday at First Presbyterian Church on Broad Street. The choral society’s public performance of the oratorio will be Sunday at 3 p.m. (Josh Bergeron | Times-Journal)

For the 66th year, the Selma Choral Society will perform its rendition of a portion of the Messiah — an oratorio composed in 1742 by George Frederic Handel. The performance begins at 3 p.m. Sunday at First Presbyterian Church on Broad Street and is free, though the choral society will ask for a voluntary offering to help pay for future performances.

Director Gordon Welch described it as an opera without the acting that describes the life and reign of Jesus. Welch said the group has continued to perform the Messiah for 66 years because of its relevance to the holiday season.

“It’s a yearly tradition and our gift to Selma,” he said. “We perform the same thing every year because it’s part of the Christmas season.”

Monday, the group held its final rehearsal, but performed as if hundreds of people were in the audience.

The oratorio begins with the choir singing in unison, but breaks into individual solos as the performance progresses. Welch said the large number of singers involved in the Messiah is another impressive aspect.

“It’s really amazing to see how many churches and different areas are represented,” he said. “We have 40 singers this year.”

This year’s program is dedicated to the late Quentin Lane, a local organist who came up with the idea to perform a selection from part one and all of part two of the Messiah.

“He was really a great musician,” Welch said. “He traveled and studied the organ all over the world and passed away last year. We wanted to honor him because he played an influential role in this year’s program.”

Though the choral society has performed The Messiah for 66 straight years, Welch said he and organist Sarah Cater don’t have plans on stopping any time soon.

“We are going to keep going until Sarah and I can’t do it any longer,” he said. “They can wheel us in here in wheelchairs and we will still do it.”