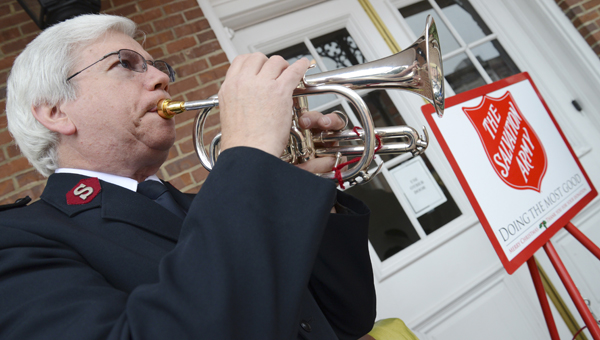 Major Steve Welch performs on his bugle in front of Selma City Hall during a ceremony marking the start of the Salvation Army’s Red Kettle Campaign. — Jay Sowers

Except, during this game poverty is the opponent Welch is hoping to defeat.

“At kickoff of a football game, you are confident you are going to win the game,” Welch said. “And right now, we are confident the people in this community will provide the resources necessary to help thousands of people this Christmas season and throughout the year.”

Speaking during a kickoff ceremony Friday on the front steps of Selma City Hall, Welch spoke to those attending, encouraging them all to help anyway they can during the annual kettle campaign.

“Through the years, this campaign has been called the ‘miracle of the bell’,” Welch said. “It has really caught on. And now the Salvation Army is in 126 countries officially.”

Welch said there are several ways members of the community can help this season, the first being the old fashioned way — standing beside one of the trademarked red kettles.

“You can help us raise funds by ringing a bell at one of our kettles,” Welch said. “You can do it by yourself, or with your church or business.”

Along with dropping money in, or volunteering at a red kettle, Welch said credit card donations can be made over the phone or online at salvationarmyusa.org.

This year, Welch said people can set up a virtual kettle on their Facebook page, by following a link available at the Salvation Army of Selma Alabama’s page.

“This virtual kettle can be posted on your own page and shared on your friends’ pages,” Welch said.

To volunteer locally, Welch asked for interest parties to contact Henry Allen at 407-8746.

Welch offered thanks Friday to those who will make a difference during this year’s Red Kettle Campaign.

“We just want to thank you for being a part of this year’s campaign,” Welch said. “Thank you for giving your time and resources to make this possible, again this year.”

Bogue Chitto Community residents will have another opportunity to ask questions about switching to the West Dallas County water system... read more