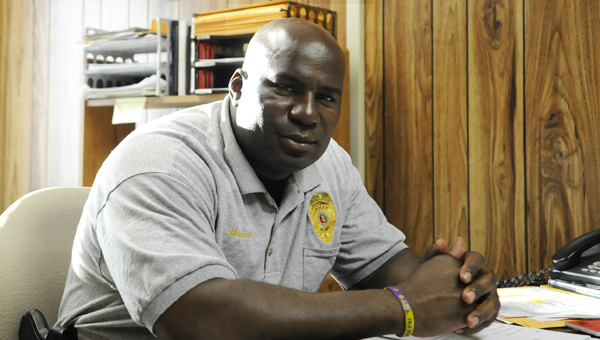 After serving in the U.S. Army, as a national guardsman and active duty non-commisioned officer, Curtis Muhannad took his military knowledge and joined the Selma Police Department, where he has worked for the past 12 years.

Curtis Muhannad is well acquainted with the phrase “serve and protect”.

After serving his country for 22 years in the U.S. military, Muhannad is protecting Selma as a member of the Selma Police Department.

Soldier and policeman weren’t at the top of his career list as a child. In fact, Muhannad initially wanted to be a truck driver.

It was at that point he decided to join the military. As a junior in high school he joined the U.S. Army National Guard.

His initial military occupational specialty — driving military trucks — fulfilled both of his childhood dreams, but then he decided the National Guard wasn’t enough. Muhannad transitioned to active duty as a non-commissioned officer in 1993 and was transferred to Fort Carson, Colo.

Soon after, he was deployed for the first time — to Manheim, Germany — where it wasn’t all work for Muhannad.

“I tried to experience the culture as much as I could,” he said. “We see it all on television, but a lot of people don’t get the opportunity to see Europe in person.”

In 1999, he took a brief hiatus from the military when his contract expired and he didn’t renew it.

“They swore me in in my yard,” he said. “My neighbors came outside and were watching because they thought I owed the military time. The thing was that it was already pre-planned for that day.”

Around the same time he also joined the Selma Police Department.

“I started looking at career fields in law enforcement and other public services,” he said. “I wanted to stay near my parents and when (former Selma Chief of Police) Chief Green called and offered me the job, I was ready to park my truck.”

Muhannad wasn’t done with the military just yet. In 2010, his National Guard unit was deployed to Iraq.

“When we got off of the plane in Kuwait, it must have been 150 degrees,” he said. “It felt like someone was pointing a hair dryer straight at your face. “

“It’s not a desert with beautiful sand like everyone thinks; it was rough,” he said. “When you got a mission you knew you were going to get shot at and might have to deal with (improvised explosive devices).”

During his time in Iraq, Muhannad received the Bronze Star, a military award given for meritorious service. It currently sits on a bookshelf in his office.

“It’s something I am really proud of,” he said.

Muhannad, now the commander of the police department’s criminal investigations division, ended his 22 years of service in the armed forces in January, but said he still maintains military values and tries to instill them in young officers.

A casual glance at Muhannad might reveal a hardened, tough police officer, but a closer glance reveals a motorcycle-riding, video-game-playing father.

“It wasn’t any fun to be away from home,” he said. “You really want to speak to your family and kids in war. Being in a war zone really makes you respect the time you have here on Earth.”

During his time with the department, Selma Chief of Police William Riley said Muhannad has proven to be a dependable, hard-working part of the department. Muhannad played a vital role in implementing the first certified field training program at the department. He also helped establish a counseling program.

“Anyone can be placed in charge, but the question is can you lead?” Riley said. “(Muhannad), and a few others, are people I can count on to get the job done. He leads by example.”

Selma Chief of Police William Riley looks over just a few of the hundreds of bikes that will hopefully be... read more