Auburn pulls away from Florida Atlantic 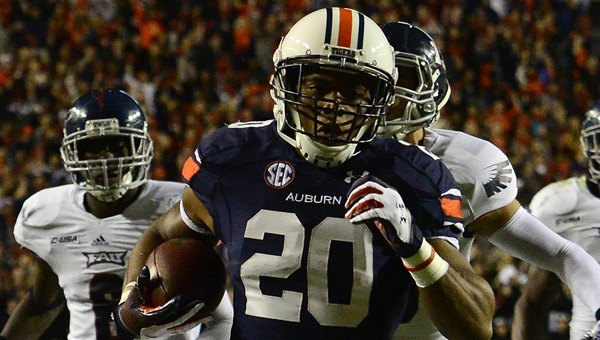 Auburn running back Corey Grant runs for the Tigers’ second touchdown of the first half against Florida Atlantic. Auburn pulled away in the second half to win 45-10.–Todd Van Emst

Johnson, a freshman, threw a 36-yard scoring pass to Coates on his first snap after replacing Marshall, who was taken to the locker room with a shoulder injury early in the second quarter. Marshall returned to the Auburn sideline, but not the game, as Johnson threw a 67-yard touchdown pass to Coates later in the quarter.

Florida Atlantic (2-6) trailed 38-0 before quarterback Jaquez Johnson scored on a 29-yard run with less than 1 minute remaining in the first half.

Jeremy Johnson completed 10 of 16 passes for 192 yards with two touchdowns and one interception.

Auburn, which leads the SEC and ranks No. 8 in the nation in rushing offense, had 422 yards rushing. Cameron Artis-Payne led the Tigers with 93 yards rushing, including a 1-yard scoring run in the third quarter.

On the Owls’ fourth play, running back Jonathan Wallace’s fumble was recovered by Jermaine Whitehead. The turnover, forced by defensive end Dee Ford, set up Corey Grant’s 43-yard touchdown run one play later to give Auburn a 14-0 lead less than 4 minutes into the game.

Auburn’s special teams added a big play in the first quarter. Chris Davis returned a punt from near the Auburn goal line 70 yards to the Florida Atlantic 28. Marshall scored on a 10-yard run four plays later.

Marshall hurt his shoulder when sacked by defensive end Eugene Robinson on the second play of the second quarter. Auburn reported Marshall was held out for precautionary reasons.

Next week, Auburn will travel to Fayetteville to take on Arkansas. Following that game the Tigers play Tennessee, Georgia, and Alabama.

TUSCALOOSA (AP) — One thing quarterback AJ McCarron and No. 1 Alabama won’t stand for is being labeled something as... read more