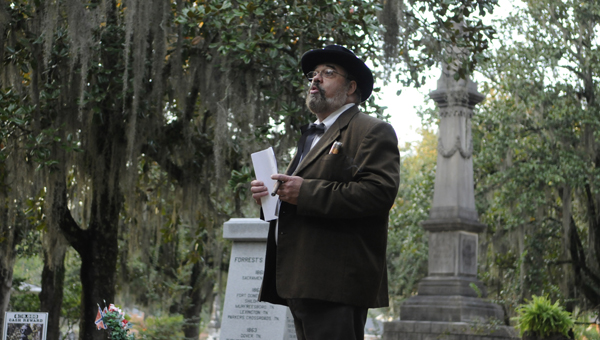 Tourists from around the state gathered in historic places around Selma last weekend to hear history and ghost stories as a part of the annual Haunted History Tours.

The first tour took place Friday at Old Cahawba. The second toured areas near downtown Selma. In total, the tours sold more than 200 tickets, tourism director Ashley Mason said. Proceeds from Friday’s Tour will go to pay for renovations at Old Cahawba and money from Saturday’s tour will go to the Selma-Dallas County Historic Preservation Society.

Saturday’s tour began at the historic St. James Hotel, which officially opened in 1837 as the Brantley Hotel. The hotel closed in 1892, but while it reportedly played host to legendary outlaw Jesse James.

Though James died in 1882, his spirit supposedly still lurks in the hotel’s hallways.

Room 214 is one of three that James stayed in during his time at the St. James, Concordia Chamber of Commerce Executive Director Sheryl Smedley said. Guests have also reported hearing James’ dog during their stay, Smedley said.

At the cemetery, actors played influential and infamous Selma residents, telling guests about the people buried there.

Benjamin Turner, a legislator who was born into slavery, is buried in Old Live Oak Cemetery. Turner taught himself to read and by age 20 he could read and write fluently. He was eventually named the manager of the St. James Hotel in Selma. While his slave owner was fighting in the civil war, Turner oversaw his owner’s property and businesses.

Former Vice President William Rufus Devane King is also buried in the cemetery. He was only the vice president for six weeks before his 1853 death. He was 67 at the time.

Next on the tour were trips to Grace Hall, the Baker-Brooks home and the Trotter House. At each house, residents told of personal encounters with paranormal activity.

At the Trotter House, Norm Trotter talked about his move in date, 22 years ago, that was the same day as the death of a former resident of the house — Robert Edgar.

When Trotter’s family first moved into the house, his daughter woke up and saw what she thought was a woman at the end of her bed.

Trotter also told a story of a strange experience earlier that day.

“At 1:38 a.m. this morning I looked at the clock and turned across the hall, looking into a dark room,” he said. “Every hair on my body stood up. I don’t know what it was, but I haven’t ever had that feeling before. “