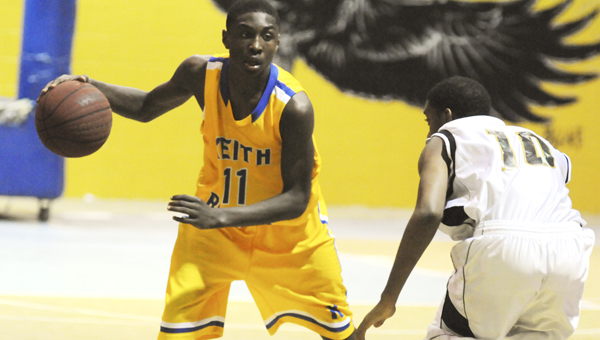 There may not be any presents to open, but many local coaches compare Monday’s start of basketball season to a winter holiday that is often represented by a jolly old man in a red coat.

“To most coaches that put what most of the coaches I know put into it, this is like Christmas early,” said Keith boys head coach Tommy Tisdale.

No, it isn’t time for Santa Clause to come to town yet, but basketball practices — marked by the familiar sound of sneakers running up and down a gym floor — officially opened Monday for AHSAA teams and expectations are high all around Dallas County.

Tisdale, like many coaches in Dallas County, has good reason to be humming a holiday tune or two. His team made the central regional final last season and returns a lot of players off of that team.

“We get an opportunity to be in the gym and see what guys have worked on fundamentally and watch it begin to come together,” Tisdale said when asked what he looks forward to about the start of practice.

The Bears made the state championship game last season and return Harriet Winchester, who averaged 16.5 points and 11.5 rebounds in the Class 1A Final Four last season.

Southside’s girls team did not have as much success, but head coach Jason Bothell is working to get his team to that level. Bothell said the black belt always provides a lot of tough games, something he enjoys a lot.

“The talent base in the black belt is very competitive and I am looking forward to getting my girls to a point where we can compete consistently on every night,” Bothell said.

Down the road at Selma High School, boys head coach Woodie Jackson is ready to get back in the gym and see how much his players have improved on over the long offseason.

”We are very anxious,” Jackson said. “I think we had a real good summer and a real good preseason. The kids did a good job lifting weights and conditioning.”

Meanwhile, the best player in the county — at least according to any recruiting rankings available — sits at Dallas County High School, searching for a state championship.

The Hornets and power forward William Lee, ranked No. 65 by ESPN.com’s recruiting rankings, fell in a regional playoff game last season to Dora, after being ranked No. 1 for most of the season.

Ellwood Christian is hoping to bounce back this season after a close loss in the Class 1A, Region 5 tournament last season.

On the AISA side of things, Morgan Academy and Meadowview Christian’s boys’ teams hope to make another trip to the playoffs. The girls’ teams hope to build off last season and improve this season to make the postseason.

With many teams in the county being listed among the preseason favorites to compete for a state championship, it is easy to see why excitement is high for the start of the season.