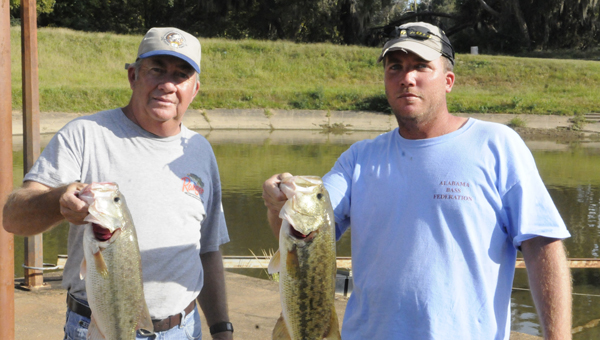 Dennis turner, left, of Jones and Nicholas Turner, right, of Clanton hold up big fish they caught during the Dallas County High School bass fishing tournament Saturday at the Selma Marina. With a total of 11.35 pounds, the duo won the fishing tournament and the grand prize of $1,000. — Daniel Evans

A total of 34 teams of boaters took part in Dallas County High School’s bass fishing tournament Saturday at the Selma Marina, helping the PTO raise $3,600, while at the same time reeling in a big fish or two.

“The tournament itself was a great success,” Dallas County High School principal Michael Blair said. “I don’t know how many things you can do to make around $3,500 profit for the day. The turnout was great.”

Blair said the money raised from the tournament will all go to the chiildren, specifically towards necessary supplies that students need, like computer program licenses or computer hardware.

“I know that in my six or seven years as an administrator of the Dallas County system, our budget was cut by a third or more,” Blair said. “You still have to do the same things so when those expenditures come up you have to find a way for them to be paid.”

The overall winners of the tournament were Nicholas Turner of Clanton and Dennis Turner of Jones, who caught five fish for a total of 11.35 pounds. After passing a required polygraph test, the duo took home a grand prize of $1,000. Second place were Mark Phillips and Paul Wilkerson, earning $500. Scott Phillips and Preston Phillips took home $250 for third place. Phillips and Wilkerson also won the big fish pot by catching the day’s biggest fish at 4.64 pounds.

Thirty sponsors helped make the tournament possible by coming up with the prize money for first, second and third place.

PTO vice-president Monique Brech actually stated the idea of a fish tournament years ago, but had to convince PTO president Dr. Frances Kendrick and Blair that it was a good idea.

Now, after a successful tournament and a good turnout, Kendrick said she hopes to make this year a yearly event.

“The fisherman that came in were all just great, great people to come in and help support us,” Kendrick said. “Thirty-four boats is a great start and next year we hope it is even bigger.”

Although there is a lot of planning to do, the hope is for the tournament to take place next year on the second week of October.

Boaters were put into the water in the order they signed up for the tournament, which started at daylight Saturday morning.

“It was a really fun day,” Kendrick said. “A lot of boats came in. It was exciting.”

Each boat featured a two-person team that attempted to catch the biggest total amount of fish.

Hundreds join in to run Saturday for a great cause

More than 300 runners took part in either the Integrity Worldwide 5K or the one-mile fun run Saturday morning at... read more