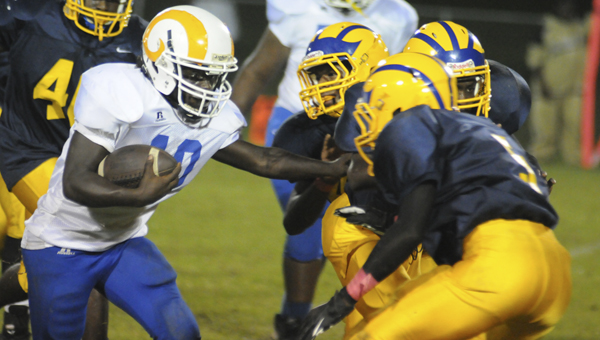 ORRVILLE — Knowing how important a win would be to their postseason hopes, the Keith Bears scored late to complete a comeback 14-12 victory against Akron to stay alive in the Class 1A, Region 3 playoff race.

Bears quarterback Maurice Crumpton threw a 37-yard touchdown pass to running back Delmuss Irby with 2:54 remaining in the fourth quarter to give Keith the lead for good.

“They loaded up the box and I saw it the play before that they didn’t have anybody sitting in the middle of the field, so we took advantage of it and thank God it worked out,” Keith head coach Harry Crum said about the play call. “Delmuss Irby was wide open and he has caught that pass several times this year.”

Akron nearly pulled off a comeback victory of its own, driving the ball to the Keith 10-yard line with 46.1 seconds to play. From there the Bears defense, which held the Rams scoreless in the second half, wouldn’t budge, holding Akron without yards on three consecutive downs and turning the ball back over to their offense.

Crumpton knew what to do from there, taking a knee and starting the celebration of a huge win for the Bears.

For a while, it looked like all of the game’s scoring would come in the first half. Keith rallied to take an 8-6 lead on a Crumpton to Irby throw with 9:20 remaining in the second quarter.

It looked like that score would hold up until Rams quarterback LaDarious Hayes found Tyslon Evans for a 37-yard touchdown pass on the final play of the first half, quieting the Bears crowd and forcing Crum to send a stern message at halftime.

“Giving up a score that I knew could be the difference in the game on the last play of the half, that’s just unacceptable,” Crum said. “I let my boys know my sentiments towards that. I didn’t talk to them much at the half, just told them how I felt about that and I left. They got the message.”

The defense showed how well they understood Crum’s message by shutting out Akron in the second half.

Considering the Rams moved the ball with ease on their opening drive of the game, Keith’s defense really surrendered nothing other than the hail mary that changed the game going into the locker room.

Meanwhile, the Keith offense started to click, although the Bears could not get the ball into the endzone. On two separate possessions in the second half, Keith moved the ball inside the 5-yard line but was held on downs by a stingy Akron defense.

The second of the two goal line stands came with 4:46 remaining in the fourth quarter. Keith was down to only one timeout remaining after spending two trying to get into the endzone on the previous drive, so the Bears defense had to come up with a stop.

They did, holding Akron to a three-and-out and forcing the Rams to punt from their own endzone with 3:02 remaining in the game. The punt was downed at the Akron 38, giving Crumpton great field position and plenty of time to lead the Bears into the endzone for the game winning touchdown.

He’d only need one play.

The Bears win certainly helped their playoff hopes. Considering Keith has upcoming region games against No. 2 Maplesville and Autaugaville, the Bears have a lot of work to do to sew up a playoff spot, but tonight was a big step in the right direction.

“We needed this win,” Crum said. “If we continue to win, everything else will take care of itself.”

The Bears are now tied for third in the standings at 3-2. If Keith wins its final two games the Bears will make the playoffs for the sixth consecutive season. Next week Keith plays at Autaugaville.