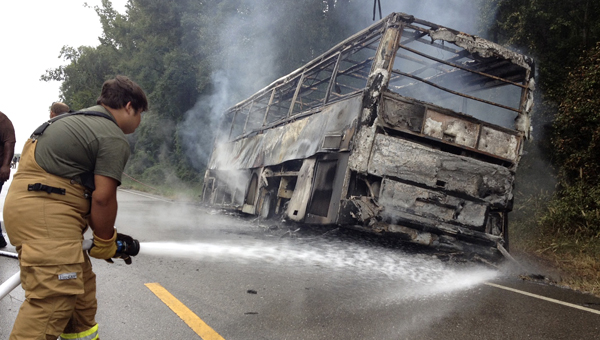 The East Perry County Volunteer Fire Department work to put a bus fire Saturday afternoon on Alabama Highway 219. The bus, one of two carrying players and personnel from Concordia College’s football team, ignited after a tire blew out. The bus, and all of the contents — which included the team’s game equipment and uniforms — was a complete loss. No one was injured. — Jay Sowers

Concordia College Alabama head football coach Don Lee could not have been more frank as he recalled the near tragedy his team experienced Saturday.

As Lee’s team was traveling to Fairfield Saturday for a scheduled game against Miles College, the second of two charter buses experienced a blown tire, which then led to a fire; a fire that ultimately consumed and destroyed the bus and everything on it.

The charter, operated by a Prattville-based company, was reportedly carrying 62 players and personnel, caught fire in a rural area of Perry County on Alabama Highway 219, less than a mile before Perry County Road 64.

“It was still flamed up when we got there, but they got the kids out and across the road,” Essex said.

Monday, after accessing what was lost in the blaze, Lee’s attention turned to the team’s upcoming game — and season — considering the team lost just about everything in the fire.

“We have about 10 helmets left,” Lee said. “We lost jerseys, camera equipment, shoulder pads, everything. Right now, we’re trying to figure out what we need and where to get it from.”

Lee said he had received a call from Dallas County High School, which offered some shoulder pads to the program, but that won’t be enough to meet the demands of a college program scheduled to play its next game Thursday. Concordia College-Ann Arbor in Michigan has also called and offered aid.

“We are still going to play Thursday,” Lee said of the Hornets’ scheduled game in Livingston against the University of West Alabama. “UWA has been great. Their coach called me Saturday afternoon, while we were still on the side of the road, asking if there was anything they could do.”

While insurance will likely cover the college equipment lost, which Lee estimates could reach as high as $70,000, the items lost by students won’t be covered.

“Our main focus was getting the students off the bus and making sure they were safe before we even thought about any of their stuff or the equipment,” Lee said. “We just thank God everyone is safe.”

Even without equipment, and a disappointing 0-2 start to the season, Lee said his team met for practice Monday morning.

“It was an interesting practice to say the least; everyone out there without pads or helmets. But, it was good, hard practice,” Lee said. “We will be OK. We are going to do everything we can to play Thursday and we are going to play hard.”

One shot, killed outside Selmont club

The Selmont community was rocked early Sunday morning with the news of a shooting that took place at an Idaho... read more