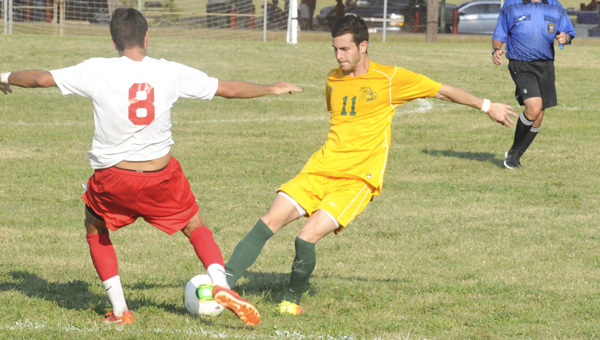 Concordia College Alabama’s Tomas Wais tries to get by Florida College’s Joe O’ Drain during the Hornets 3-2 victory at Bloch Park. Concordia had a 1-0 lead at halftime but had to fight off a tough challenge from the Falcons, who rallied to tie the game late in the second half. –Daniel Evans

To say Concordia’s 3-2 victory over Florida College had a little bit of everything, would be an underwhelming description of a game that started nearly five hours after the players first arrived at the field.

The two teams agreed to reschedule the game from 4 p.m. to 11 a.m. to accommodate the Tampa, Fla. based Falcons, who had a long drive home following the game. The teams showed up, along with fans, but one integral part was missing: referees.

The referees were not told of the time change, in a mishap that resulted in the game moving back to its original start time of 4 p.m.

“With all the stuff we were doing in order to pull things together, I forgot to tell the referees that we had changed,” Concordia head coach Winston Williams said. “We have a contract with the referees, whether we come or not, we still have to pay them a fair amount of money. We had to just go ahead and wait until they came. It was one of those slipups that happens once in a lifetime.”

When the game finally began, the teams seemed unaffected, as the game was a wild back and forth affair that resulted in a 3-2 Concordia win.

Stanley Benjamin scored his sixth and seventh goals of the year to give Concordia 1-0 and 2-1 leads, but the Falcons fought back to the tie game at 2-2 in the second half.

In stoppage time, the Hornets Jorge Guarin, playing in his first game, kicked in the game winning goal for the Hornets.

Even with the victory, Williams said his team needs to continue to work on defense. The Hornets have scored 10 goals this season in four games, but they’ve also allowed 10 goals.

Williams said he has seven freshman starting, meaning the Hornets haven’t had a lot of time to play together.

“We have a very porous defense,” Williams said. “The coverage on the defense is not as good, so we have just have to go back and work with that.”

A strange pattern is occurring for the Hornets though. In all four games this year — two victories and two losses — the score has been 3-2. Williams said he kept telling his players to shoot from the outside, instead of waiting to get right at the goal.

“If we can get some more outside shots, we will get the ball to ricochet off the post, off the back and get a better  opportunity [to score],” Williams said.

The game was played as Bloch Park because Conocordia’s new soccer field is still under construction. An unusual amount of rain in August halted construction and moves the estimated completed date to October.

Concordia gets blown out by Stillman