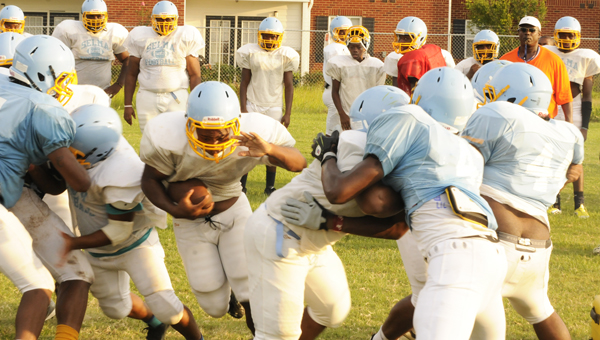 A Selma running back flies through a hole during a practice drill Thursday at Selma High School.–Daniel Evans

Selma High School’s football camp built team unity and allowed the coaching staff to begin implementing the playbook, giving the Saints a head start over where they usually are at this time of year.

In all, 77 Selma football players reported to camp, sleeping and eating under the same roof with the rest of their teammates. Saints head coach Leroy Miles said his team overcame some obstacles at camp, like being homesick, getting up early and practicing and learning to be on time for team meetings.

“It went well. We learned some valuable lessons in camp,” Miles said. “I think we pulled together as a team. We are now united as one.”

Football-wise, Selma focused on its conditioning program and implementing some of the basic parts of its playbook.

“We focused on getting conditioned and getting our system in offensively and defensively, putting in our system. By having the camp and having the kids here on campus we were able to do a lot of teaching,”Miles said.

Miles was so happy with the camp that he said it will be an annual thing.

He said parents were very helpful, lending a helping hand when it came to feeding the kids and cleaning up.

“It was almost like having 30 or 40 coaches on the staff with the support we had from the parents and I would just like to say thanks to them,” Miles said. “It wouldn’t have been possible without the support of the parents and this Selma football booster club.”

The coaches each took turns doing a devotion.

“I think the kids enjoyed that the most, our team meetings at night and our devotions. Our last devotion was done in front of the school,” Miles said. “I think it was a really good devotion, and it set the tone for where this program is going to go.”

Looking ahead, Selma’s jamboree game is Aug. 23 at Keith High School and Miles said the days are counting down fast.

“I think to our advantage, we are in good shape right now, very good conditioning from our offseason strength and conditioning program,” Miles said. “I think Robert Wilkerson did a great job getting them in shape, getting them bigger, stronger, and faster. I feel we are ready to play.”

The 2013 Gridiron magazine cover vote showed the strength and passion of each school’s fanbase, with an incredible total of... read more