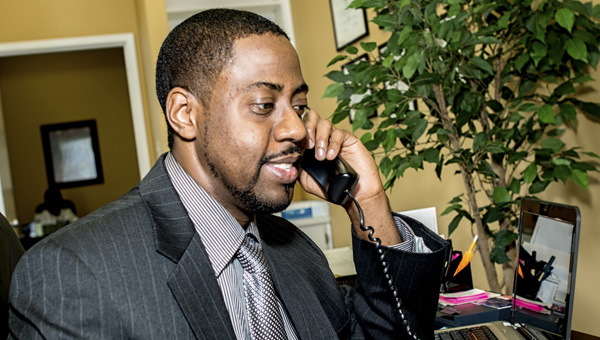 A man, who was mentored by J.L. Chestnut and learned the practice of law from watching his ways, is now making waves for himself in the community. Prince Chestnut Jr. said because he was born and raised in Selma, he understands the hearts of those in the community who appear before him in court, as he is the current, presiding municipal judge.

“When I graduated from law school, I pretty much followed him around like a little puppy,” Chestnut said about J.L. Chestnut, his second cousin who was known for representing civil rights marchers following Bloody Sunday and for being the first black attorney in Selma. “I used to just watch him and ask him questions all the time. He would always ask me why I asked him so many questions, but I wanted to learn everything.”

Chestnut said he always saw himself moving to a metropolitan area after practicing law in Selma for several years and representing municipal boards in surrounding counties like the Lowndes County Commission and the Greene County Board of Education.

But he decided there was too much work to be done in Selma and saw the lives he could impact by sticking around. In 2006 he left J.L. Chestnut’s lawfirm and stepped out on his own. By January of 2007, he was appointed as an associate municipal judge.

“And that was my confirmation I did the right thing,” Chestnut said about leaving to go on his own. “It was like God kept telling me, ‘You need to move, you need to move.’”

Even though he was offered a partnership at J.L.’s firm, he said he had to make his own waves and turn down the offer because, “It is one thing to live out someone else’s vision for you life, but another to live out your own.”

Chestnut has served under two mayors and has worked to develop programs in the court system that serve to help curb domestic violence in homes. He also works with an amnesty court program and the H.E.A.L. Program.

“If you think about it, most of the people that come up there are young black males,” Chestnut said about his courtroom. “I’m a young black male who grew up with them and I know how these guys think. But for a couple of good choices, I could have been one of those guys.”

He relates the satisfaction of living and working to better the community in Selma to Nick Saban’s football program compared to Steve Spurrier’s program at South Carolina and quoted Spurrier by saying, “It is one thing to go somewhere that has a history of success on its own, but there is a certain level of satisfaction you get by going somewhere that is not used to the success.

“Being able to build a program into success — it’s kind of like I can see how we can get there,” Chestnut said. “It’s just getting enough people thinking along the same lines who want to commit to pushing forward to taking Selma there.”

Denson Henry With the family business headquartered in Selma, Selma-native Denson Henry, was always encouraged by his parents to travel,... read more