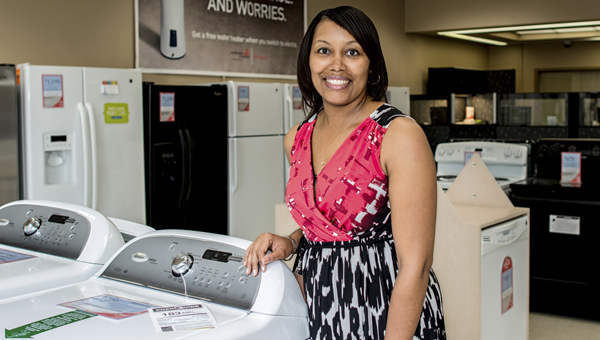 Customer service is not just a job for Latonia Tisdale, it’s her calling as she serves not only her customers at Alabama Power Company but her community as well.

Tisdale was born in Orrville and returned to Selma after graduating with a bachelor’s degree in business administration and marketing from Stillman College in Tuscaloosa and getting her master’s degree in business from Walden University. She has spent the last 10 years working at Alabama Power in Selma where she now serves as the senior customer service representative.

“I love my job, I love Alabama Power and I love Selma,” Tisdale said, smiling ear to ear. “Here, I am more of an office contact person, so any issues that may arise or when customers come in with a problem or complaint, I’m the go to person for that.”

In addition to being the go-to person, Tisdale also covers bill issues and handles all the accounts payable. But Tisdale’s role in Selma amounts to much more than the community’s power bills — she’s a leader throughout the community and holds leadership positions on the boards of multiple organizations including the Alabama Power Service Organization, the United Way and the American Red Cross.

Tisdale said it’s important for her family, which includes her husband Tommy and their two young children, to do everything they can to get involved in the things the community is doing.

“We’re just involved in whatever the community has going on — the Walk for Life, the Butterfly Run — whatever is going on in the community we try and participate,” she said. “And we’re just trying to show and convince others as well that we need to be involved.”

Tisdale said her civic-minded attitude is one she has had her entire life, and it’s an example she hopes to pass on to her children as well as others in the community.

Tisdale said being involved is crucial to the success of the community and the city, and it’s important to remember the history of where this community has come from.

“Selma has a massive amount of history and people who are from Selma, we neglect that. We don’t actually cherish it and understand it and believe in it like we should,” she said. “ I want my kids to get into [Selma’s history] and understand it, know about it and be able to pass it on to their kids, so we can move forward and they can be prepared to move forward and know that this history here.”

And it’s that kind of leadership that she’s already fostering in her own family that makes Tisdale a frontrunner for Selma’s future.

“I think it’s time for this next generation to step up. But you know what, that takes these old leaders — they should be grooming someone and training them and preparing the new generation to take on the city and take the city to the next level where it needs to be.”