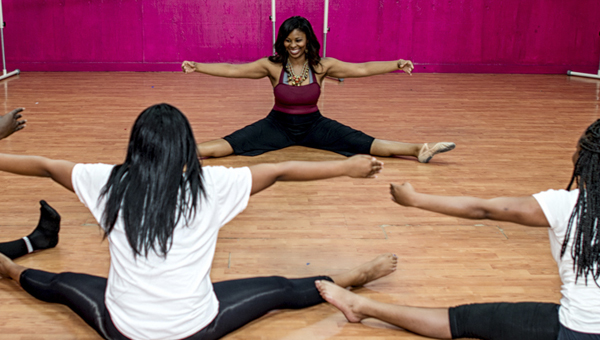 For Courtney Washington, giving back to Selma is a habit she just can’t seem to kick. Graduating from Selma High School in 2004, Washington attended the University of Alabama to pursue a degree in marketing. Although dance was her passion, Washington said she knew she had to earn a degree in a promising career field first.

“During the summers I would always come back to Selma though,” Washington said. “My first summer, I started a small dance camp. Each summer I came back, the camp got bigger and bigger.”

Starting off with 20 girls, Washington taught praise dance — something she has always loved.

“I started dancing when I was three,” she said. “I wanted to be a theater major at Alabama, but my mother encouraged me to get a degree in something more suitable, so I studied marketing. But I still took as many theater and dancing classes as I could.”

Still having a need to express herself through dance, Washington said she looked forward to coming home each summer and teaching. After earning her master’s degree from Troy University in 2009, Washington had more than 100 young dancers enrolled in her summer program.

“Parents started asking me if I could expand the program and hold the classes during the school year,” she said. “I didn’t have a building though, so I started to pray about it.”

After several months of uncertainty, Washington said her prayers were answered. What used to be Divine Reality came to Washington with an opportunity she couldn’t pass up.

“They had a building they wanted to renovate into a performing arts center — it was just perfect,” Washington said. “They took care of everything, did all the renovations.”

Now, what used to be Washington’s summer hobby has turned into a full-year dance studio — Beautiful Feet School of Dance. Teaching ballet, tap and jazz, Washington said she is finally doing what she always wanted.

“The people here in Selma — the students, the families — they are what make me want to stay and give back, because others did the same for me,” Washington said.

Aside from staying busy at the dance studio, Washington also serves as bookkeeper at Concordia College Selma. Investing in Concordia’s students, she said, is just another one of the many reasons why she loves Selma.

And with a bright future ahead of her, Washington said she’s excited to see what else life has in store for her. So far, she said she’s accomplished more than she could have ever imagined.

“Looking back, I didn’t think this was where my path would lead,” she said. “But I’m happy it did. I hope to be a part of Selma’s next set of leaders.”