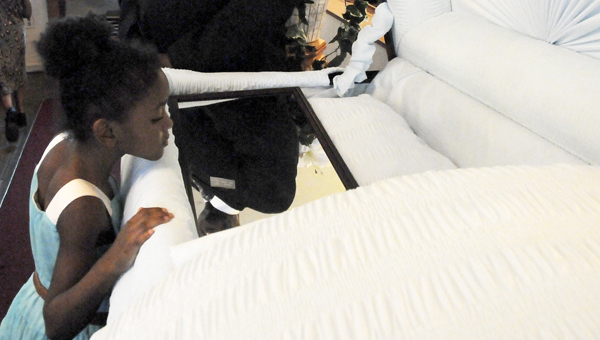 The congregation at Ward Chapel AME, at the funeral for devil Saturday, was invited to view the remains of the devil, which was actually a mirror at the bottom of the casket. –Ashley Johnson

One church in Selma decided they would lay the recent gun violence in Selma and around the world to rest for good — by burying the devil Saturday afternoon.

Ward Chapel A.M.E. on Philpot Avenue opened their doors to the community and invited church leaders as well as politicians to speak about the devil and its influence on Selma and the world.

“We are finally going to lay the violence to rest,” Rev. Raymond Mayes of Ward Chapel AME told those at the funeral. “After a week of violence in Selma, I got with the church officers and we decided we need to do something about the violence and someone said well lets bury the devil. Satan is running rampant in many forms and fashions.”

During early June, within a matter of two weeks five were dead in Selma at the hand of gun violence in four homicide cases and one suicide. Mayes, being new to the city in March, vowed Ward Chapel would, “hold down their corner of Philpot and make sure Satan doesn’t pop his head up any more and then maybe we can go over to the next block on the right and the next block to the left and start changing the community and changing the city.”

Saturday, the Funeral Service for the Devil, had the small choir of Ward Chapel swaying and singing to hymns “Yield Not To Temptation” and “amens” were heard as scripture was read from the book of Job — a book that tells the story of Job being tempted by Satan in every possible way.

Selma Mayor George Evans spoke about where he sees Satan in Selma as someone who works each day to bring the city together and Sen. Hank Sanders delivered the Eulogy for the devil.

“The devil is not lazy, he looks good by the also makes other things that aren’t good look good,” Sanders said. “He is smart. These are good things about the devil. He can make us do things we don’t want to do.”

At the end of the service in the whitewashed chapel, funeral attendees peered into a casket to view the remains of the devil. What they saw was their selves, as they gazed into a mirror in the coffin.

“This is a new day and a new time and things are changing people are beginning to understand and want a different spiritual life,” Mayes said. “There is a revival in Selma because life is coming back and people are realizing there is a whole lot to hope for.”

The Selma-Dallas County Historic Preservation Society purchased the Old YMCA building on Broad Street and has spent the past months... read more