A Selma man was arrested Thursday for assaulting another man, shooting him in the back of his leg and then taking the victim to the hospital himself. 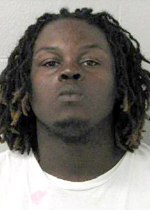 The Selma Police Department arrested Clarence Ezell Brenson, 20, Thursday at 12 p.m. and is charged with assault 1st degree. Benson is accused of shooting the victim, a 20-year-old black male of Selma, in the right calf. Police report that the shooting occurred at approximately 2:30 a.m. on Lamar Avenue, Thursday night.

According to a statement by the SPD, “the victim was treated at Vaughan Regional Medical Center after Mr. Brenson dropped the victim off.”

Brenson was later arrested at the hospital when he returned to check on the victim.

The shooting is still under investigation. Brenson is being held in the Dallas County Jail with a bond of $2 million.