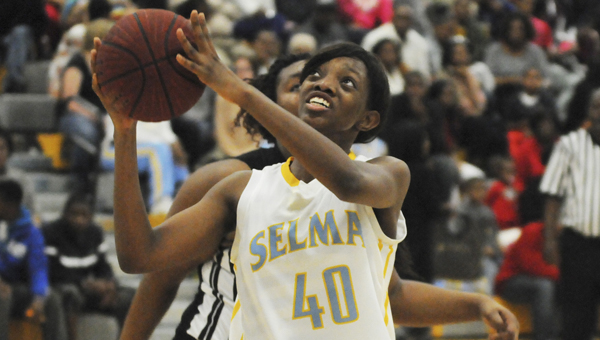 Ford, who was on the South team, missed his three field goal attempts and went scoreless, but he did have two assists in seven minutes. The North won the North-South Boys’ All-Star Game 96-70, with five players scoring double digit points.

“It was a great experience,” Ford said. “There was great competition. It was a chance to show your talent.”

Ford said the one thing reinforced through pre-game practices and during the all-star game was that, “you have to play defense.”

Woodie Jackson, Selma’s boys basketball coach, described Ford as an all-around point guard that knows how to put points on the scoreboard.

“He’s not a real big kid, but he has some outstanding skills. [He’s a] great playmaker, can handle the ball extremely well,” Jackson said in a past interview. “He’s more of a shooting point guard, also has a good shot.  He possesses outstanding quickness.”

Porter, who played on the South squad, scored two points on one field goal attempt and had two rebounds in eight minutes. The North won the North-South Girls’ All-Star Game 84-36, breaking away in the second half by out-scoring the South 51-16.

“There was a lot of good competition,” Porter said. “I learned that there are a lot of different ways people play, but it ends up all coming together.”

Porter said the difference in the girls’ game was on defense.

“We didn’t execute, like getting back on defense,” Porter said.  “We played defense, but they were beating us down the floor.”

She said meeting other players and seeing how they shared her love of basketball was one of the best parts of the experience.

Selma girls’ basketball coach Anthony Harris said after the Saints lost two outstanding post players to graduation last offseason, Porter needed to step up and she has answered the call.

“I guess she took all the bumps and bruises behind some other post players and she decided, ‘Well, this is my time to step up’,” Harris said in a past interview. “She took the initiative and knew we were going to need help this year, and like I said, she stepped right in there.”

Morgan shows improvement in Thursday’s 7-on-7