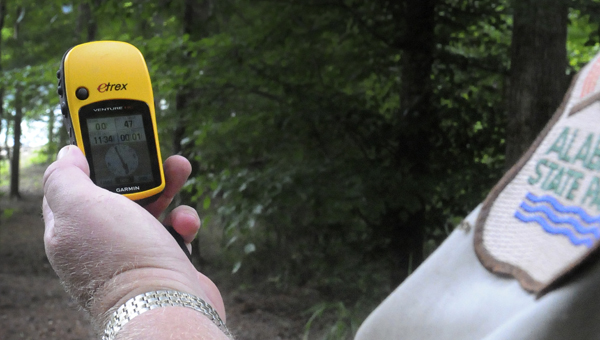 You can look high and low for caches at Paul M. Grist State Park and you still might never find them all. — Ashley Johnson

Children only dream of finding hidden treasure out in the wilderness and using an old pirate’s map to help guide them there. But in 2013 with every technological feature possible scrolling under their tiny fingertips, they have the ability to compete worldwide in treasure hunting games.

Geocaching is a real-world treasure hunt and the great news is treasure, or caches, are hidden all over the world. From China to Selma there are millions of these little nuggets hidden in telephone boots, in streetlights and in tree stumps — really any good hiding spot.

While the world was quick to catch on to the geocaching phenomenon, Selma has more than 40 listed caches within a 10-mile radius of the city limits and more than 20 hidden throughout the city of Valley Grande. There are several downtown at famous locations like the Edmund Pettus Bridge and the Old Depot Museum. Online visitors who stop by Selma and find these caches leave comments on their adventures in Selma and what they found in their hidden cache. 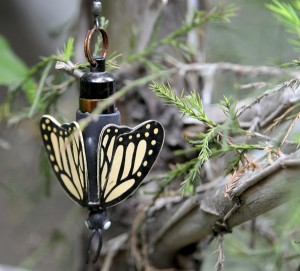 But one location in Dallas County houses more than 100 caches and those who help guide visitors to these locations say these caches will spoil those who are avid treasure hunters and geocachers.

Three park rangers at Paul M. Grist State Park say they are always seeing visitors at the park using GPS navigators to search for geocaches, and they too participate in the online game out in the wilderness.

“You could spend days hunting down all of the caches here,” Roger Nichols, manager of Grist State Park said, reaching for a jar of wooden prizes he made to place inside some of the geocaches. “The great thing is you could come out here and spend an hour or two or spend a whole weekend just searching for these.”

Nichols, like many geocachers, uses the website www.geocaching.com. This site, which has several free smart phone apps, will tell geocachers the location, coordinates and a hint to find the treasure.

Once on the website, users can quickly create free accounts. Once in, they search an area, like Selma or Grist Park and can find all of the caches located in the area. They can print these out or download them to smart phones and track each one to their exact coordinates.

Each geocache has a name and the park rangers talk about them casually in their headquarters saying, “Well we could go and check out Pop Goes The Weasel or hike up to A Bug’s Life.” 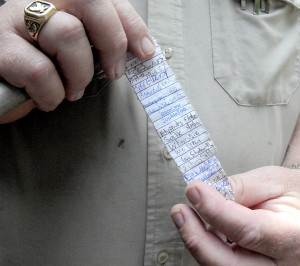 “Some of the ones here at the park are as far as two miles away and they have to be hiked to,” Nichols said. “But we also have some just feet away from our headquarters at the park.”

While there are many geocaches in Selma, the ones at the state park are unique according to park ranger, Kyle Kinman.

“A lot of kids are looking for the bigger caches and that is what we have here at the park,” Kinman said. “A lot of the ones you will find all over and in Selma are smaller and really tiny but these are interesting and unique.”

The geocaches range from small bug-like capsules hidden in thick wooded areas to one that is a five-gallon bucket hidden under a stump. There is one called Gilligan’s Island that will have geocachers wading waist-deep in water and mud to reach it. Others are located right off of the roads through the park.

Nichols said out of the 6,000 visitors the park receives each year, about 300 to 400 of them come and geocache. When they do, he said, it always attracts attention and other campers want to join in as well.

“Its good for families and for kids because it just gives them something to do,” Nichols said, listing the reasons geocaching can be an event for families whether they are camping or not. “It will get the kids away from video games and the internet and stuff like that. It will get them outdoors,” and it is competitive for some, especially for teenagers.

He said as a geocacher, his favorite thing about the hobby is that he can not geocache for months, and then pick it right back up again.

“I just pick up my GPS and log some up. It isn’t something you have to do, it’s just something we can do. Anytime we go camping, we just load up a bunch of them and if we get bored then we just go out and geocache for a while,” Nichols said, who has traveled to parks all over the state and logged in caches.

How to start geocaching

Start by visiting geocaching.com and downloading a free app for smart phones. Setting up a username is free.

Then, search a postal code or address and find geocaches located nearby. If using an app, the app will guide and beep until users are at the correct coordinates. Nichols, suggests that if not using a smart phone, print out each geocache desired from the website and then type in the coordinates to a GPS tracking device which can be purchased any store that carries camping supplies should have them available.

Once the geocache is found using the coordinates and a hint, remove the hidden item and sign the logbook located inside. Many caches ask that visitors take something and leave something. Geocachers will often leave behind small odds and ends like key chains or plastic toys. Nichols said he sometimes uses items called Travel Bugs that ask to be taken around the country.

“I have this Travel Bug and look at how many locations it has traveled to,” he said, pointing to a map that showed his small stuffed football called Rammer Hammer had gone from Auburn all the way to California. “I put it out there in March, three months ago and it has already been to 86 locations.”

He suggested children might enjoy tracking these items as well and learning more about geography.

Don’t just go out and find geocaches, make one as well. The website and database for geocaching allows users to log coordinates in for new geocaches, then create a logbook for people to sign and leave something behind.

Once hidden and locked away, check up on the geocache on the website and see what comments other geocachers have left behind. Sometimes they comment to report that maintenance is required, or that pieces to the geocache are now missing, so checking in on them is important. 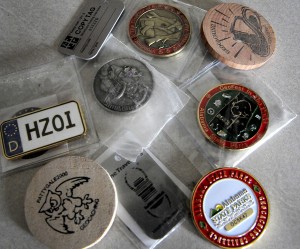 This challenge is for experienced geocachers but organizers say newcomers are encouraged to participate. Geocachers must visit all 22 state parks in the state of Alabama and collect valuable clues from each park from the geocaches.

Once collected, there is a hidden puzzle waiting at one location and winners receive a special prize.

The challenge started in early April, and Nichols said it only took several days for one team to complete the entire challenge by splitting up across the state.

“It only took six days and someone collected the coin for going to all 22 parks,” Nichols said. “There are just so many doing this, they get into groups and they split up throughout the state in the north and in the south and were able to collect all of the clues.”