Veach will suit up for Selma one final time 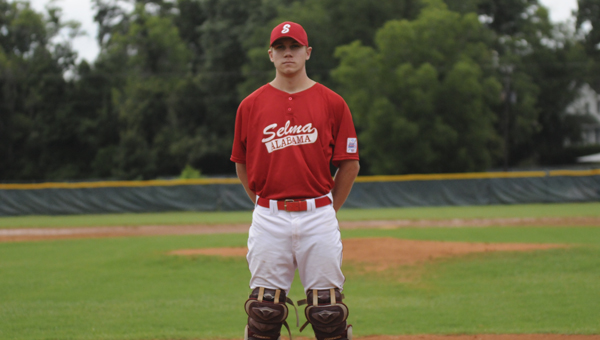 Selma’s Hunter Veach will play catcher this week for the Selma All-Stars in the Dixie Major State Baseball Tournament at Bloch Park. The tournament starts on Thursday and runs through Monday.–Roderick Mitchell

By Roderick Mitchell
The Selma Times-Journal

Hunter Veach has played competitive baseball since he found a love for the sport at the age of three. After graduating Morgan Academy last year without pursuing baseball, he thought his days on the diamond were over, and elected to be an assistant softball coach at Auburn University at Montgomery.

However, when the opportunity arrived, Veach jumped at the chance to get back to bat. And after palying for the Selma Dixie Major All-Stars for several years, Thursday’s state baseball tournament will be the last time he suits up.

The majors division features players who are 17,18, and 19 years-old and Veach will be too old to play next season. But Veach said just having the opprotunity to play agian, even if it wasn’t for recruiters, was worth it.

“You’re just playing with some good teammates and having fun,” Veach said. “You’re not playing to get recruited.”

Veach plays catcher for the All-Stars, and said although he’s played many positions, he’s always preferred catcher above the rest.

“[There’s] something about [catcher]. It’s in my genes. My granddad was a catcher and my sister, Kendall Veach, recently committed to playing with the University of South Alabama to be a Division I catcher,” Veach said.

Veach said the All-Stars head coach, Johnny Raybon has taught him a lot about baseball.

“He knows how to teach us what he knows -— how to share that knowledge,” Veach said of Raybon, simply noting Raybon’s knowledge of the sport is the greatest lesson he’s learned so far.

Raybon has been coaching Veach for four years, and during that time, Veach said he and his coach have seen the All-Stars lose some good players who have moved on to play for other cities.

“We lost a good pitcher in Crawford Taylor two years ago. He was by far our ace growing up,” Veach said. “Since then, Corey Ingram and Joey Raybon have stepped up pitching wise in helping us get here.”

With the progression of talent, Veach said he thinks this year’s team has a chance to win the state tournament. Either way, it will be the last time he suits up for a Dixie Majors game.

Selma is scheduled to play their final game at Bloch Park Thursday against Gadsden at 5:30 p.m. The tournament is double elimination and will run through Monday, July 15.

“After sitting out there watching every single game, you get to miss the game and you realize how fun it is,” Veach said.

Veach is currently a student at The Auburn University at Montgomery studying mathematics. As both an assistant coach and a player of the sport he loves most, Veach said it is a toss up between what role he prefers more.

“The playing side is a lot more fun. You can actually get in there and make a difference in the game,” he said. “But being on the coaching side of it, I get to share what I’ve learned from the coaches I had and from my dad.”

The tournament starts at 10 a.m. Thursday. Four games will be contested on the tournament’s opening day. Selma plays the final game of the night against Gadsden.

Morgan Academy’s Ford Manderson drives to the basket against a player from Lee-Scott in a game last season at Morgan... read more