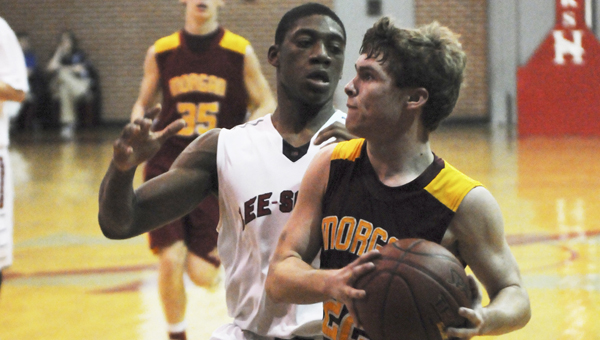 Morgan Academy’s Ford Manderson drives to the basket against a player from Lee-Scott in a game last season at Morgan Academy. The Senators have played in three playdates this summer.–File Photo

Before preparation for football got into full swing, basketball was the focus in the month of June at Morgan Academy.

Senators head coach Bob Taylor credits basketball playdates for the program’s growth over the last few seasons and this summer is no different.

Morgan Academy took part in three playdates during June as the countdown to basketball season continues.

“The improvement our team has made through playdates in the last three years has been phenomenal.  It has made a huge difference with our basketball [program], for them to see different levels of basketball,” Taylor said. “This summer was probably one of the better summers we’ve had, because [the players] kind of understand what to anticipate with our summer basketball.”

The Senators got in a lot of work in a short time period. After taking part in their own basketball playdate, they participated in playdates at Birmingham Southern and Patrician Academy in a one-week span.

Keeping the kids fresh was a difficult task for Taylor, because his team played nine games in three days at Birmingham Southern.

“We went to Birmingham Southern that weekend [after the Senators’ playdate] and we got about nine games in. [We] really stepped our level of competition up. We played schools from Georgia, Mississippi, and of course some of the schools here in Alabama. Public, private  —— we saw a little bit of it all.  That probably helped us as much as anything,” Taylor said. “We don’t really look necessarily at winning and losing in the summer but for us, we went 3-6 at Birmingham Southern, which was probably the best we’ve done [in my time here] at Birmingham Southern. This was our third year to go and this was the best we’ve done. We had chances to win other games -— [chances] to hit shots. In three of the other games, we had a shot at the end of the game to win the game. That proves that we are getting better. We are improving.”

One of Taylor’s biggest concerns this offseason has been getting his younger players up to varsity speed. He says that watching some of the bigger schools at the playdates probably helped his team grow.

“The biggest thing I saw [were] the improvements and our younger kids learning to play at that speed that we want to play at. We got to see Mountain Brook’s A-team,” Taylor said.“They won the 6A state championship last year.  You get to see them. You don’t play them but you get to see them get up and down the floor.”