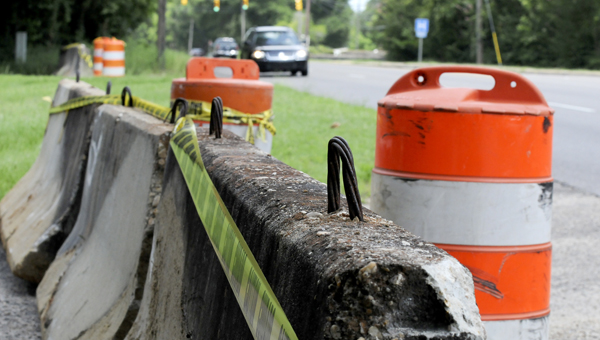 After residents on Mallory Drive petitioned for their street to close off from Dallas Avenue, the city approved barriers to go in place Tuesday night to increase safety of children on the street and reduce crime. — Ashley Johnson

Cement barriers were placed down at the entrance of Mallory Drive Wednesday off of Dallas Avenue, following a unanimous council vote that granted the barrier request made by the majority of residents in the neighborhood. The residents were concerned about the high volume of traffic that was using Mallory Drive as a cut-through around the light on Dallas Avenue nearby and speeding while doing so.

A public hearing was held prior to the council vote, where Ward 3 Councilman Greg Bjelke asked residents of Mallory Drive to speak out either for or against the closure of the street to Dallas Avenue. Two residents said they were in agreement whatever the decision, two spoke out against it and 12 voiced their support.

“As parents what we really fear is one of our children actually dying,” Bob Frazier, resident of Mallory Drive said about the high amount of non-residents that speed down their street. “No one wants to have a tragedy. We don’t want to come back later and think we could have done something about this after something terrible happens … too much is at stake.”

Frazier said there was an instance where the power and lights on the street were out, children were outside and drivers who were non-residents of the neighborhood sped by at speeds close to 40 mph.

Bjelke said the concrete barriers were put in place, and as soon as possible he will work to get the curb raised to make the block off more aesthetically pleasing.

“Those barricades will be there until they will pop up that pavement and probably extend a curb so it looked like it never happened, like it was never there,” Bjelke said. “I hope it is done before the bridge closing on Dallas Avenue, which is six weeks away.”

The Alabama Department of Transportation will be replacing the bridge on Dallas Avenue beginning in July and the project will continue for at least eight months. Hooper Drive, the street feeding into Mallory Drive, will be used as a detour route around the bridge. Though residents said the closure of Mallory Drive is not related to the bridge project, they said they feared an increase of traffic speeding through when the detour route goes into effect.

Resident Mel Gilmer was one of two residents who said he was not 100 percent in favor with the street closing to Dallas Avenue.

“The turn from Atkins (Avenue) onto Hooper (Drive,) there is a safety issue there,” Gilmer said, explaining the Dallas Avenue entrance was sometimes a safer area to exit and enter the neighborhood from.

There was also a discussion about, at some point, putting in a pathway for drivers that allowed them to circle around the barricades so they could turn around according to Selma Mayor George Evans.

Evans also assured the closure would not impair the response from emergency vehicles to the neighborhood, as the fire hydrants were not located near Dallas Avenue.