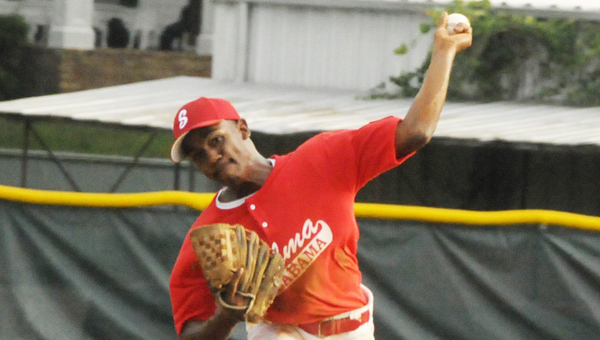 Selma’s Keyshawn Ford throws a pitch in the second inning against West Alabama during the pre-majors district tournament at Bloch Park on Friday. Selma held on to win 3-2.–Daniel Evans

The Selma pre-major allstars relied on fantastic pitching and great defense in their 3-2 victory Friday over West Alabama in the first game of the pre-major district tournament.

Selma found itself in an early hole, but rallied quickly in the second inning to grab a 3-1 lead.

Keyshawn Ford started on the mound for Selma and went the distance, holding West Alabama to four hits on 104 pitches thrown. Ford was one pitch away from reaching the pitch limit set in Dixie Youth but managed to force Matt Eichen to pop out on his 104th delivery of the night.

“We had great pitching from Keyshawn Ford, left handed pitcher. We had some key hits in the game at times [when] we had people on base to score some runs. We had a good defense,” Selma head coach Scott Gunter said. “We have got a lot of speed on our team and we use that to our advantage.  That’s what helps score the runs. We played good defensive ball. [We were] solid all the way around.”

Gunter did not know that Ford was so close to his pitch limit and did not have another pitcher warming up.

Ford seemed to get into rhythm as the game progressed.

Early on he walked a couple of West Alabama batters, which led to West Alabama crossing the plate first and grabbing a 1-0 lead.

In the second inning, Selma took the lead for good when Davian Brantley brought in Jalen Furlow. Achilles Rutledge, and Miller Spivey scored a few moments later to give Selma a 3-1 lead.

In the fourth inning, West Alabama got a double from left fielder Wyatt Hale, which scored Ryan Schroeder and made the score 3-2.

In the fifth inning, Eichen reached second on a throwing error at first base and Kyle Friday walked to put Selma in some danger. Ford handled it well though, forcing Stephan Stewart to fly out to end the scoring threat and preserve Selma’s 3-2 lead.

In the bottom of the sixth, Selma nearly added to its one-run lead. Furlow singled and Davian Brantley walked to move runners onto first and second base.  Both runners advanced on a ball that hopped past West Alabama catcher, Stewart, putting Selma in great shape to add cushion to its lead. The rally ended quickly though, as Rutledge struck out and Spivey grounded out to end the inning.

In the top of the seventh, West Alabama’s Jacob Rodriguez walked to begin the inning. Huckabee hit a pop fly into shallow left, but Joel Taylor made a tremendous diving catch for the out.

Ford forced Seth Aiken and Eichen to pop out for the final two outs to end the contest.