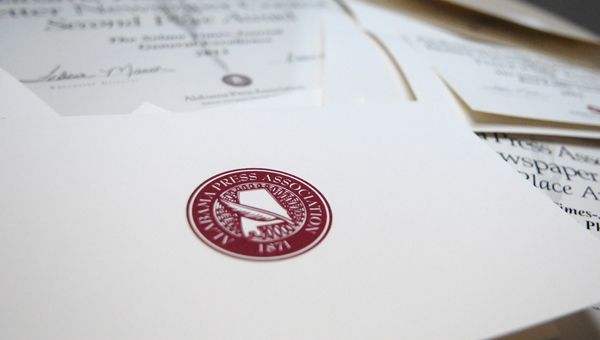 The Selma Times-Journal won multiple awards at the Alabama Pres Association’s Awards Banquet on Saturday. The Times-Journal placed second in general excellence, making it one of the best newspapers in the state and making our hometown proud.

At the conclusion, The Selma Times-Journal was named one of the top small, daily newspapers in the state of Alabama after having earned a total of 20 editorial and advertising awards.

Among those awards announced, the Times-Journal was named the recipient of the top advertising award in its division — Sweepstakes — and was named second overall in the General Excellence category, only coming in behind the Opelika-Auburn News.

“I’m extremely proud of our staff for being recognized as one of the best newspapers in the state,” Times-Journal publisher Dennis Palmer said. “They pour their heart and soul in to their service to the community and it shows in the stories they write and the photos they take, which is something I’m convinced the judges saw when comparing the Times-Journal to others in our peer group.”

On the editorial side of the contest, the Times-Journal received the following in addition to the General Excellence Award:

As for the advertising awards earned, the Times-Journal received the following in addition to winning Sweepstakes:

The awards reflect work produced by newspapers between January and December 2012. The Kentucky Press Association judged the entries.

“It was an absolute pleasure to see the hard work put forth by the staff honored in such a huge way,” Times-Journal editor Tim Reeves said. “I’ve always said we do not produce a newspaper each day for awards, but it is nice to have the hard work recognized by your peers.”

Kathi Needham was honored as the Selma Rotary Club Citizen of the Year on Monday. She is pictured with Ray... read more