Selma’s Ford will play in All-Star game in July 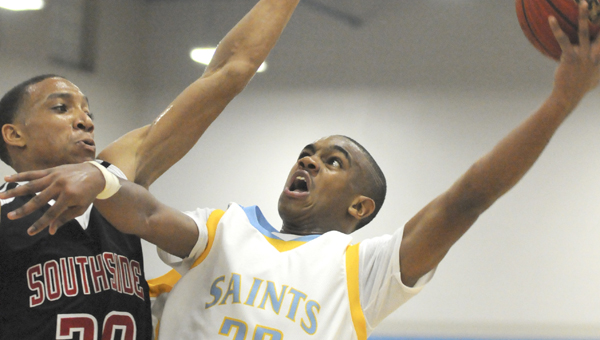 Selma’s Keshawn Ford drives to the basket against Southside’s Robert Sullivan during a game last season at Selma. Ford has been selected to play in the North-South All-Star game on July 17.–File Photo

“He averaged about 13 points last year,“ Selma High School basketball head coach Woodie Jackson said. “He led us in assists with about three a game and averaged right at four rebounds a game.”

Jackson describes his rising senior as an all-around player that is “one of the leaders of the team.”

“He’s not a real big kid, but he has some outstanding skills. [He’s a] great playmaker, can handle the ball extremely well,” Jackson said when describing his point guard. “He’s more of a shooting point guard, also has a good shot.  He possesses outstanding quickness.”

At 5’9, 150 pounds, Ford does not have a large frame, but that does not stop him from crashing the boards.

“He’s a little guy but he will stick his nose in there. He has a good sense of rebounding also … He knows how to watch the ball. Even if he’s not shooting, when his opponents shooting or his teammates shoot, he watches the ball,” Jackson said.

“He has good instincts there and he also gets a lot of defensive rebounds because he [watches] the ball come off the rim. [He] knows how to go get it and can judge where it is going to bounce at.”

Ford will play with Dallas County’s William Lee on the South squad.

Selma’s Brenna Porter made the girl’s team and will play for the South squad.

“She’s been working hard ever since she got to Selma High and this year she just blossomed because of hard work,” Selma girls basketball head coach Anthony Harris said in a previous interview. “She’s dedicated, she works as a team player. She’s a jewel and she’s got another year with us. We’re hoping we can get bigger and better things from her.”