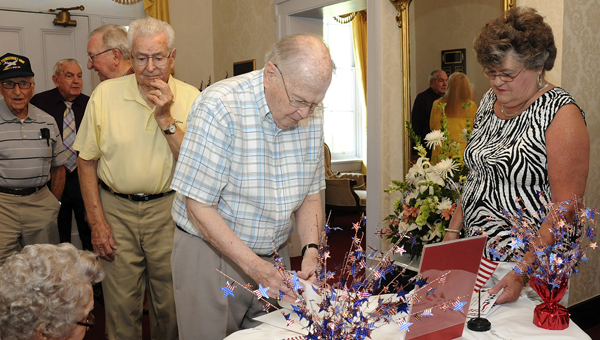 World War II veterans gathered at the Vaughan-Smitherman Museum Tuesday as part of a special reception. Before entering the program, each veteran signed their name in a guest book. –Sarah Cook

As a way to say thank you to some of Selma’s greatest heroes, the United Daughters of the Confederacy Chapter 53 hosted a reception Tuesday for World War II veterans at the Vaughan-Smitherman Museum.

While listening to music reminiscent of the wartime era, veterans shared stories with one another about their time spent overseas, fighting for our nation’s freedom.

“It was a privilege to have served and it’s an honor when people show their respect,” said Frank Arnold, who served in the 81st infantry in Japan. “I was drafted when I was just 18 years old and then two weeks later I was at a training camp getting my physical. Six weeks later I was in the army — it seems so long ago.”

Helen Lattal, one of the few female veterans at the reception, said after working on the draft board in the early 1940’s, she knew she wanted to do more to serve her country.

Lattal said she can remember jumping off a 20-foot boat deck as part of her training.

“We sailed all the way to Ireland, but we never got off the ship until we got to England,” she recalled.

For Todd Kiscaden, although he did not serve in World War II, remembering these veterans is paramount because of what they fought for.

“These people are referred to as our greatest generation. They essentially saved the world from national socialism,” Kiscaden said. “And for some reason, for all these years, they’ve never really been recognized.”

Kiscaden paired up with Pat Godwin of the UDC Chapter 53 last year to host the reception. And because it went so well, he said they decided to host it again this year.

Throughout the ceremony, veterans told stories that brought laughter and tears, recalling their time spent in service.

Arnold said after all these years, it’s nice to still be remembered and thanked for his bravery.

“It shows me that people really care, and it does my heart good to know that,” he said.