Registration for the next alligator hunting season to open June 4 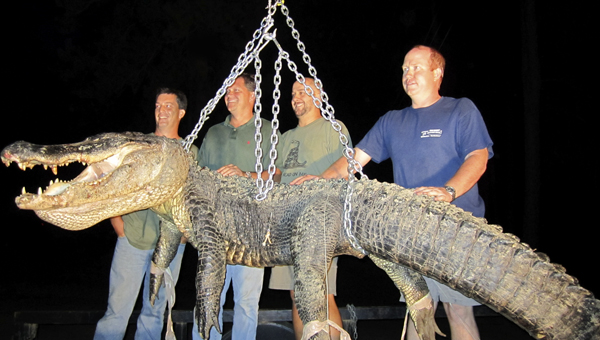 The team of Brad Utsey, David Cothran, Jamie Thomas and Tad Lightfoot pose for a picture next to the 604-pound alligator they landed in August 2011.

The American alligator is the largest reptile in North America. A fully mature alligator may grow to 14 feet in length and weigh as much as 1,000 pounds.

For those who have had the ability to take part in the past two special alligator hunting seasons — especially those in Dallas and Wilcox counties — have learned the waters around this area have some of the largest in the state.

During the 2011 season, the Selma-based team of Jamie Thomas, Tad Lightfoot, Brad Utsey and David Cothran caught a monster alligator that came in at 13-foot one-inch and tipped the scales at 604 pounds.

In 2012, another Selma team made up of Jamie Calvert, Blake Jones, Fielding Watts and Will Tipton caught an even bigger alligator. This one came in at 14-foot two-inches and weighed 814 pounds.

But, unfortunately for this Selma team, it was not the largest alligator caught in the area during the 2012 season. Another team captured one that was the same length, but weighed a little more at 838 pounds.

“The Fancher Gator,” as it was called, is the current record holder in Alabama.

Now, it’s time for the 2013 season. The Alabama Department of Conservation and Natural Resources announced it will open registration for Alabama’s eighth regulated alligator hunting season on June 4.

The hunts will be held on Aug.15-18 and Aug. 22-25 in southwest and west central Alabama, and on Aug. 9-25 in southeast Alabama. To register for the alligator hunts, visit outdooralabama.com starting June 4. Online registration for the random tag drawing will end at 8 a.m. on July 12.

The random selection of hunters takes place on July 12. Applicants will be able to check their status at outdooralabama.com after the drawing takes place. Applicants selected to receive a permit must complete an online acceptance by 8 a.m. on July 16. After that date, alternates will be called by telephone to fill any vacancies.

Selected hunters and their assistants are required to have in their possession a valid hunting license. Most hunters will be required to complete the Alligator Training Course provided by Wildlife and Freshwater Fisheries Division personnel, some exceptions apply.

Hunters who have participated in previous alligator hunts and are selected to hunt this year should contact their local WFF district wildlife office to determine if they are exempt from the mandatory training class. A list of WFF wildlife district offices can be found at outdooralabama.com/contact.

Each person receiving an Alligator Possession Tag will be allowed to harvest one alligator. Hunting hours are 8 p.m. to 6 a.m. in all locations. All Alabama hunting and boating regulations must be followed.