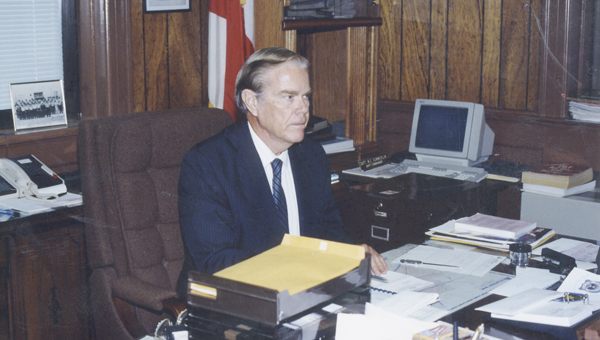 Former Selma Chief of Police Melvin Summerlin passed away this week. Summerlin served with the SPD from 1952 until 1991.

From the ranks of patrolman, Melvin Summerlin Sr., known to his family as “Paw-Paw” and many city of Selma employees as “Slim,” earned his stripes, the respect of others and the position of Selma Chief of Police.

Over a career that spanned 38 years with the city of Selma, Summerlin served in the city’s police department, leaving behind a legacy current Selma Chief of Police, William T. Riley, says is one many should work to live up to.

“When I got here, he would come by and talk with me, Riley said. “He would tell me about his time at the department and how he was really proud of how far the department had come.”

Riley said the officers and personnel at the department would always enjoy seeing Summerlin when he visited.

“He got along with everyone and they all enjoyed his visits. He would even attend some of our new officer swearing-in services,” Riley said. “He is someone we will truly miss.”

Summerlin is preceded in death by his wife of 49 years, Ruby Frances Shows Summerlin.

Summerlin was a member and deacon of Shady Grove Baptist Church and a longstanding member of the Fraternal Order of Police.

In addition to the pallbearers, the Selma Police Department and deacons from Shady Grove Baptist Church will serve as honorary pallbearers.

The Dallas County School Board brought forth some interesting information Tuesday at their regular meeting. While much school business is... read more