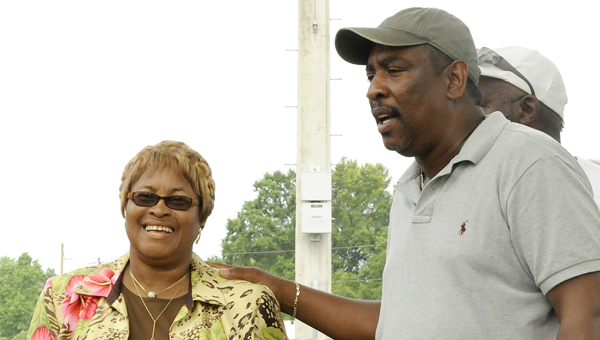 In honor of: Selma City Councilman Michael Johnson, who represents Ward 8 on the Selma City Council, gives remarks Wednesday at the dedication of the press box at the Ernest L. Bennett Baseball Field in honor of former councilwoman Jannie Venter, left. –Sarah Cook

Members of both the Selma city government and community gathered Wednesday during a small ceremony at a local baseball field to honor the hard work and accomplishments of one of Selma’s former city councilwoman.

The press box at Ernest L. Bennett Baseball Field, located on Plant Street, was renamed in honor of Jannie Venter, former Ward 8 Selma city councilwoman, who worked to enhance the field for her community during her last year in office.

Venter says her love for her community and the children who live there caused her to work hard to add a press box, concession stand and dugouts to the East Selma Baseball Association’s field.

Elton Reece, director of Selma’s Parks and Recreation Department, said the field is used for the fall league, which aims to extend children’s summer baseball experience by giving them the opportunity to play for almost two months after Selma’s city league baseball ends.

“This is the fourth year the field will be used after the city league ends for our fall baseball league, and this field is right in the middle of this community, making it even more important to the people here,” Reece said.

After welcoming everyone, Venter gave thanks for the recognition of her hard work and the cooperation of the city government to make her vision for her community possible.

Many members of the community offered their appreciation for Venter’s efforts.

“We are so grateful. Councilwoman Venter did everything she could to make our plans for the East Selma Baseball Association a success,” Michael Johnson, current Ward 8 city council member, said. “We appreciate everybody who helped make this a success.”

Jesse Manuel, a member of the East Selma Baseball Association, added, “We would not have been able to make this possible without Mrs. Venter.”

Venter has worked on numerous other projects for Ward 8 while in office, including repainting structures around the East Selma fishpond, installing new street signs, and completing sewer and drainage projects.

She said she was asked about having the press box renamed after her last month.

“I was told I worked too hard not to have something named after me. It is a great honor,” she said.

ROLL TIDE: Ten students from Dallas and Wilcox County were each awarded $1,200 in scholarships to The University of Alabama... read more