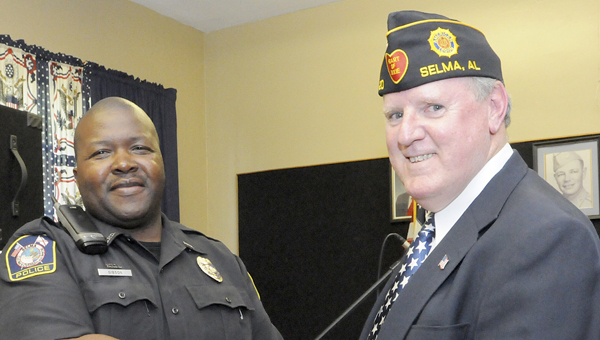 Nathan Gibson of the Selma Police Department is awarded the title of Police Officer of the Year by the Selma American Legion Post 20 Commander Bob McMasters Thursday. –Sarah Cook

The Selma American Legion Post 20 took some time out Thursday to fry some fish and also honor a member of the Selma Police Department — Nathan Gibson, field-training officer.

After frying more than 50 plates full of catfish, Bob McMasters, commander for the Selma American Legion post, said it was a great honor to be able to award Gibson with the police officer of the year title. Gibson, McMasters said, is an example of what all residents should be — giving and selfless.

Gibson, a Selma native, has worked for the Selma Police Department for five years. As a field-training officer, he said he gets the opportunity to work and volunteer in several other areas.

His favorite part about the job, however, is simply “being able to meet new people and help everyone out.”

After receiving his plaque naming him police officer of the year, Gibson said it was hard to describe the great feeling.

At the end of May, McMasters said the Legion plans to honor a member of the Selma Fire Department.

“These are the people who are out there protecting us, and it’s important that we recognize them,” McMasters said. “Everyday they get kicked in the teeth and we just want to say thank you for being our protectors.”