Selma prepares for waves of visitors with state track meet 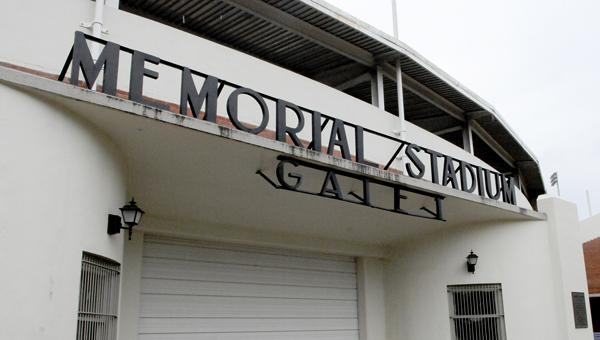 Selma’s Memorial Stadium will be a center of activity beginning Friday when the Alabama High School Athletic Association’s Class 1A-3A state track meet kicks off. An estimated 150 schools will be represented at the meet. — Tim Reeves

Selma Parks and Recreation director Elton Reece said if area businesses don’t know about the upcoming Alabama State Track meet hosted at Memorial Stadium this weekend, then they “have had their heads buried in the sand.”

During the past few weeks, Reece and city officials have worked to notify area restaurants, hotels and other hospitality industries about the more than 2,000 people who will flood into Selma, beginning Thursday, for the Alabama High School Athletic Association’s Class 1A-3A state track meet.

This marks the second year Selma will play host to the tournament, and city officials have worked to ensure the hiccups experienced last year with some businesses being unprepared for the influx of visitors doesn’t happen this time.

Reece said flyers were passed out to some businesses leading up to the event, reminding them of the tournament. He also said Wednesday, that he’s learned that every hotel room in Selma is booked as well as those in Marion and Prattville.

“I had one team contact me today looking for rooms,” Reece said. “They later called back and said they were able to book the last six rooms available in Prattville for this weekend.”

Some teams have had to book hotel rooms as far away as Montgomery.

The Times-Journal contacted a number of Selma hotels Wednesday, with each confirming they were booked beginning Thursday night.

“A lot of our businesses should do very well this weekend,” Reece said. “There’s a lot of people coming in to town, it’s just a matter of us now getting the meet going.”

“Events of this type are great for the image and finances of our city,” Evans said. “We were able to attract the AHSAA track championships because of the investment that we made in renovating Memorial Stadium.”

As for the meet, Reece said there have been some last-minute adjustments needed on the part of the city to accommodate judging requests and plans put in place for the expected rainy weather forecasted to roll through the area Friday and Saturday.

Reece said teams will begin arriving in Selma Thursday, with teams picking up their registration from the stadium after 3 p.m. He also said some of the teams will do a walk through of the track and facilities, with some “running the track to get a feel of what they will be competing on the next day.”

Despite the weather forecasts, large crowds — many of them being family and friends of the expected 150 schools represented at the meet — are expected during the two-day event.

According to Evans, more than 2,000 tickets were sold during the first day of last year’s championship meet.

General admission for the meet will be at Memorial Stadium’s gate No. 1. Tickets are $10 per day. Children ages 6 and younger are admitted free of charge.

Organizers also urged those attending that no food or coolers will be allowed in the stadium.

School Board calls for full investigation

In light of the recent allegations and the arrest of a Selma High School teacher who was allegedly having an... read more