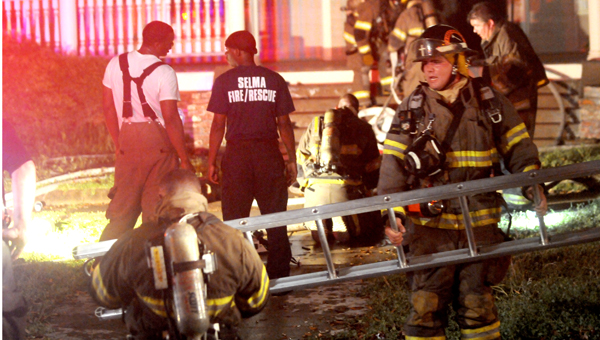 The Selma Fire Department works to contain a fire in a vacant home in the 600 block of Mabry Street late Monday night. Cause of the fire is still under investigation. –Sarah Cook

The Selma Fire Department is investigating the cause of a house fire that occurred in the 600 block of Mabry Street late Monday night. Homeowners Regina and Lou Agro, who currently live in Fort Lauderdale, Fla., said the residence is vacant.

After noticing the fire while walking their dogs, nearby residents Mason Dunn and Jacob King called the Selma Police Department at 9:45 p.m., notifying them of the smoke coming from the back of the home.

“We walked out of our house, two doors down, and it was kind of smoky in the street,” King said. “Then Mason called 911 and the police showed up a few minutes later.”

The house is currently for sale. No furniture was in the home and no one was injured in the incident.

Chief Alton Green of the Selma Fire Department said upon arriving at the scene, “the backside of the house was fully involved.”

“Major damage was done throughout the whole house,” Green said. “The fire started in the back and then came up through the second and third floors.”

Because of the severity of the fire, Green said all fire stations, including off-duty members, were called in to assist with the blaze.

“When it gets this big, we need all the man power we have,” he said.

Cause of the fire is still under investigation, but should be determined by Friday after a thorough inspection by the Deputy Fire Marshal, Green said.