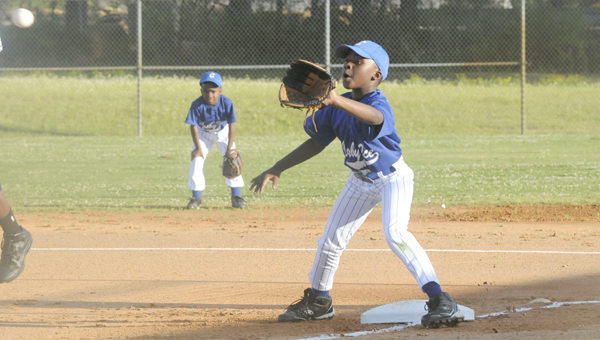 Cosby Ice’s Zachary Moore readies his glove for a catch during a game on Friday. — Robert Hudson

Cars packing the parking lots of both sports complexes and the sounds of children’s excitement in the air were sure signs that Friday was opening day for the young athletes of Selma.

Friday marked the first day of games for the 2013 Selma Recreation Department youth baseball and softball seasons, as teams played games at the old softball complex and the Dallas County Youth Sportsplex.

“It’s great to finally have the first games to get started. All the paperwork, all the scheduling and all of that is over, and it’s just great to get started,” Jones said. “Hopefully we’ll have a good year.”

Teams from as young as 5 years old all the way up to age 14 were in action during Friday’s games.

Jones said games will be played Monday, Tuesday, Thursday, Friday and Saturday, and big crowds are a common occurrence on opening day in particular.

“It’s a great crowd tonight. Opening night there’s usually a big crowd and I think we’ll have good crowds throughout the season because when little kids are playing, parents, grandparents and friends all come out to watch them play,” Jones said. “It’s great for the community. It brings a lot of different kids out, a lot of kids that don’t know each other, and they make friends while they’re on teams together. It’s just great for the city.”

Parent Angela Jones said it’s great to see the children participate in a league that teaches them valuable skills.

“It’s a feeling of pride and joy,” Angela said. “It teaches the children responsibility and being competitive.”

Tomeaka Hunter, whose son Martrel Chappell plays in the 11-and-12-year-old leagues, said the city’s youth baseball and softball programs are good for the children, and she has fun rooting for her son.

“It’s good because they can come out and do something besides sit in the house,” Hunter said. “I think it’s good for all the kids to get out and play baseball. I love being out here. It’s fun.”

Kennedy Ratliff said she loves to have fun with her teammates.