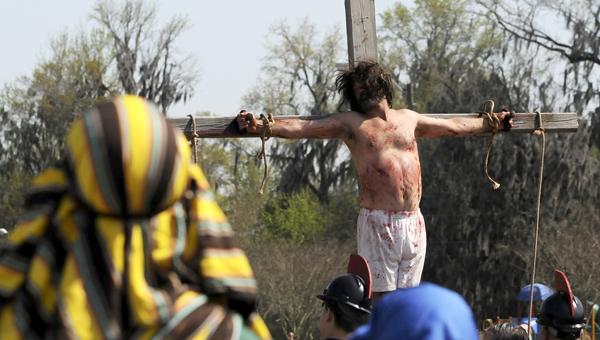 In remembrance of the death of Jesus Christ, residents and reenactors gathered at Bloch Park Friday to witness a reenactment of the crucifiction. –Katie Wood

A crowd dressed in robes and head shawls gathered outside of Selma City Hall Friday where shouts of “Crucify him! Crucify him!” followed by “We want Barabas!” could be heard echoing across Broad Street. The unlikely scene was set by members of area churches reenacting the last days of the life of Jesus Christ.

“We are celebrating the real meaning of Easter,” Robert Walker, pastor of Gateway Baptist Church and co-organizer of the reenactment said. “Easter has been so commercialized over the years. It’s been turned into bunny rabbits and new dresses and new clothes, and somehow or another the real meaning of Easter has kind of faded into the background. We want to bring it back to the foreground. So the people, even the children, will know that God’s son paid for their salvation.”

“Why do we do this?” Walker asked. “To put into [people’s] vision, the Easter story. It’s not just something we hear, it’s something we can see. A picture is worth 1,000 words, so we are trying to paint a picture of Easter — the real meaning of Easter.”

The reenactment began Thursday night with the last supper, right outside of city hall.

“[Jesus] is going to be condemned to be crucified. They’ll release Barabas, then Jesus, after he’s been whipped, he’s going to take up the cross and go down Dallas Avenue all the way to Bloch Park,” Walker said.

After Jesus, portrayed by Robert McLeroy, was convicted, he carried an actual wooden cross 1.4 miles down Dallas Avenue to Bloch Park, followed by a crowd of people taunting him, shouting, “I don’t see a king,” and “You said you have angles you can call down, save yourself.”

Witnesses described the scene as very moving, especially when they watched Jesus hanging on the cross in Bloch Park.

Jimbo Small of Crosspoint Baptist portrayed a Roman soldier in the reenactment, a role he said was challenging.

“It was actually tough to have to play the Roman soldier,” Small said. “To be the one to beat Jesus and to crucify him — as a Christian that was really tough, but at the same time everything that I did was glorifying God.”

“We just feel honored to do it so that people will really understand the real meaning of Easter. It’s not about Easter bunnies, it’s about Jesus and him rising,” Walker said. “It’s an awesome experience; it’s a life changing experience, seeing people have their lives turned around.”

The same group will have a resurrection service Easter Sunday at 7 a.m. at Bloch Park.

Selma Mayor George Evans said he’s not only excited about the project but is convinced the study will produce a... read more