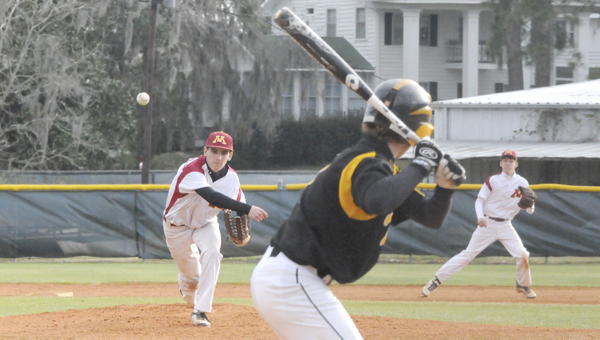 The Morgan Academy Senators saw steady improvement starting off the season, and are hoping to keep the trend going in the second half.

Jeremy Carter, head baseball coach of Morgan Academy (5-11), said while he wishes the Senators had more wins under their belts at this point, he’s seen improvement from them day by day.

“We’re getting better. We went with basketball so long, so you know some of the kids didn’t have enough practice experience, I think, when we started playing games,” Carter said. “Overall, we’re getting better, we’re improving daily. Win-loss ratio, I wish we won a few more games in the first half, but to see them improve the way they have, I’m impressed with that.”

Carter said he would like to see the Senators improve more in pitching and hitting.

“Things we need to work on is definitely getting better pitching, is one aspect. Cutting down on the mistakes there is another one, which we’re getting better at that,” Carter said. “Also, just seeing some more pitches is what they need.”

Carter added the Senators’ fundamentals have been solid, but it’s especially important they improve their hitting and see more pitching in game situations.

“Our guys are picking up the fundamentals pretty easily. They’re good athletes. They’re baseball knowledgeable, but like I said, one thing we need to work on is seeing more live pitching,” Carter said. “It gets hard when the games that you play, you don’t get to practice enough against live pitching but you have to go into a game and you don’t get to bat as much as you need. In baseball it’s all about hitting the baseball. Fielding will come early in the season, but hitting, you’ve got to stay constant with that.”

With the majority of the Senators’ region games played before spring break, Carter said the schedule has been tough, and it doesn’t get any easier moving forward.

“We play our region games too early. Our strength of schedule is good early. I’d like to have those change so we’re playing the region games a little more closer to spring break or after spring break to give my kids time to get in baseball shape,” Carter said. “The schedule’s set in stone for a couple years and we’ll just have to work with it. Overall, we’ve got a good strength of schedule. We play good teams all year really.”

More than anything, Carter said he wants to see more wins from Morgan the rest of the way.

“Overall team effort, we definitely want to improve on that, and we are. To go along with the team effort, the overall wins,” Carter said. “Try to get them a little confidence in themselves, so that they can win.”

Morgan will be at home on Tuesday against Monroe at 4 p.m.