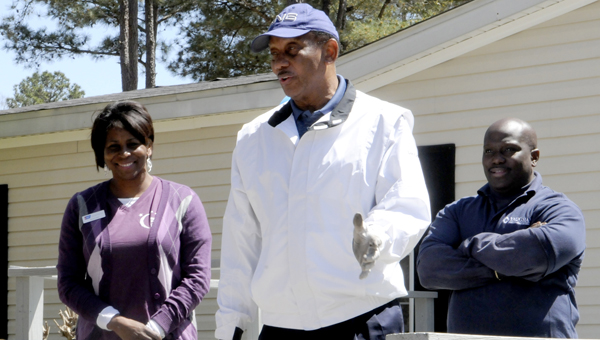 Residents teed off for a special cause Wednesday as Vaughan Regional Medical Center hosted their second annual Hope for a Cure Golf Tournament in association with the American Cancer Society’s Relay for Life.

Last year, Vaughan raised $11,000 for the American Cancer Society and this year Merrill South, director of community relations for the hospital, said they hope to raise more.

“It’s a fantastic day and we’ve had such an awesome amount of community support,” South said of the golf tournament, which was held at the Valley Grande Golf Course.

The tournament raised more than $6,000 last year, the remaining coming from Relay for Life funds.

David Sirk, CEO of Vaughan, said the hospital is so passionate about Relay for Life because “everyone has been touched in some way by cancer.”

“It’s just really great to be out here today and be a part of this fundraiser,” Sirk said before residents hit the golf course. “I hope we can raise as much money as we did last year.”

Ten teams participated in the tournament, each making up a three-person scramble.

Bridget Mills, community representative for the American Cancer Society, said it’s events like the Hope for a Cure Golf Tournament that really shine a spotlight on cancer and raise awareness.

“This is a great fundraiser and we’re fortunate for organizations like Vaughan that give back to the American Cancer Society so much,” Mills said. “They’ve raised so much money in the past and I know this year they will do the same.”

Along with raising money for a worthy cause, the tournament also awarded cash prizes for those coming in first, second and third place.

“We’ve been fortunate to have so much support,” South said. “Pepsi-Cola also donated fabulous golf bags for those with the longest drive and closest to the pin.”

Mills said she expects just as much support, if not more, to be had at Relay for Life, which will be April 19 at Memorix—al Stadium.

“Part of Vaughan’s mission is to make our community healthier, and this is just a step in that direction,” South said.

Three suspects tied to shooting on Hardie Avenue in jail; four at large

Three of seven suspects believed to have been tied to shootings on Hardie Avenue last Wednesday are now in custody... read more