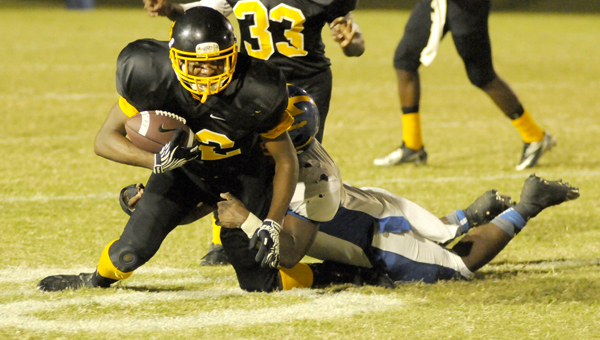 Ellwood Christian Academy’s Raheem Velazquez tries to break free from a Keith High School defender during a region game last season at Memorial Stadium. Ellwood has been going through strength and conditioning with spring practices set to start in May. — File Photo

After their first ever Alabama High School Athletic Association playoff berth in 2012, the Ellwood Christian Academy Eagles didn’t take long to get back to work improving for next season.

Ellwood Christian head football coach Mike Stokes said the Eagles took only a two-week break before getting back in the weight room.

Stokes said the rush to get back on the strength program was meant to help the Eagles get physically ready for the tough season ahead.

“It’s a grueling season, and I think with our young guys that we have coming in now, we’ve definitely got to get bigger, faster and stronger,” Stokes said. “And when you get like that it helps cut down on your injuries, and it helps pull you through the season.”

While teams aren’t allowed to hit the field just yet, Stokes said the Eagles are coming up with some creative methods to help improve their strength, speed, agility, and stamina.

“We’re not too much allowed to go on the field right now, but we’re going to implement some good yoga classes coming up to try and help us out,” Stokes said. “We do our workouts a little different, I guess, because you have the frog jumps, the wall pushes, and our workouts aim to get you in shape and get you stronger at the same time. Where other people might do three sets of six, we’re doing something after every exercise because we don’t take but a two or three second break then we jump into something else.

“That just helps us to get into shape and it helps us get a little stronger, and faster at the same time because we’re constantly moving.”

Ellwood is set to start spring practices the first week of May, and will play in a jamboree game on May 16 at Southside, which will also include Central-Tuscaloosa.