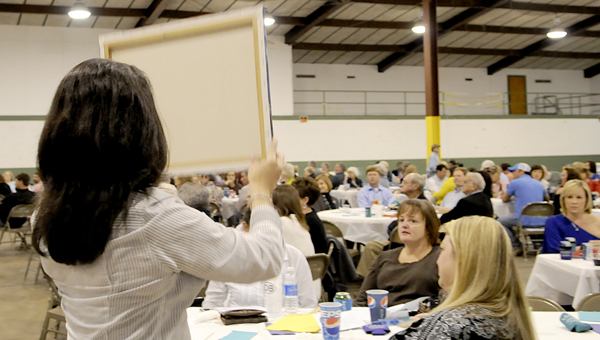 The SABRA Sanctuary annual live and silent auction raised more than $20,000 Saturday night and the funds will go towards survivors of domestic violence.

Hundreds showed up to the annual SABRA Sanctuary Auction at the Old National Guard Armory Saturday night despite tornado watches and strong winds.

The auction, which featured live and silent portions, raised more than $20,000 and fundraising chairman for SABRA, Robin Woodson, said those are just the preliminary numbers.

SABRA Sanctuary is a local, non-profit organization that serves victims and survivors of domestic violence by supporting them in areas of need such as court costs, legal advice and general supplies.

“Well we are still getting our numbers in,” Woodson said Monday following the event. “We raised about $20,000 with sponsors, tables and the auction itself.”

The event sold 10 sponsorships, more than 50 tables and a number of items like beach vacations and paintings during the auction.

Woodson said they were unsure of whether they could reach their fundraising goal of $20,000, because of the time of year and many residents going on spring break but said the fundraiser still, “exceeded our expectations.”

“We thank you for all for the support, donations and time and everyone’s effort and for participating even during spring break,” Woodson said.

For organizers like Woodson and executive director Nancy Travis, they said the best part of SABRA Sanctuary is that all of the funds that are raised by Selma and Dallas County residents stay and help those right here in the area. SABRA Sanctuary serves a tri-county area of Dallas, Perry and Wilcox Counties.

Travis said all of the people would not have attended the auction if, “they didn’t believe in what we do and our mission.”

“All of the money stays right here,” Travis said and added that all services for the victims at SABRA are free, no survivors of domestic violence are charged for any help they receive.

Travis said they get anything the victims really need like clothes, food and court advocacy.

“Our goal is to help them get free from abuse,” Travis said. “All of the money raised here tonight will help us help them do that.”

What might be classified as a shootout in a Selma neighborhood Wednesday evening thankfully did not result in any injuries,... read more