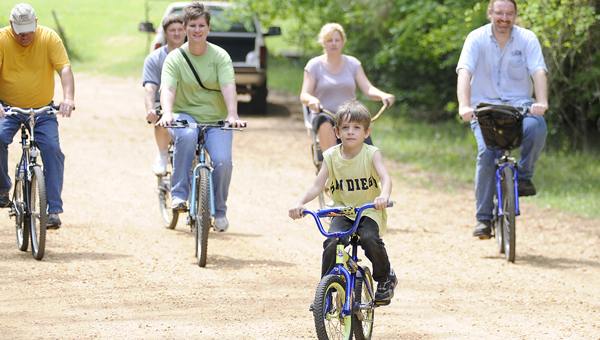 Bikers and assistant site director of Old Cahawba Archeological Park Jonathan Matthews tour the historical park during the Bring Your Own Bike Tour on Saturday. The tour gives visitors a closer look at historical sites around Alabama’s first capital, while getting a little exercise in the process.

As Selma and Dallas County welcomes in the new season, employees at Old Cahawba prepare for a second year of their popular bicycle tours.

After debuting the trails last year, Jonathan Matthews, assistant director of Old Cahawba, said he’s excited for residents to come out again this year to enjoy the unique view of the park.

“We had a lot of people come out last year and we’re looking forward to doing it again this year,” he said. “It’s just a great way to encourage people to get out of their vehicle and enjoy the park.”

Through a partnership with the Alabama Department of Public Health and Strategic Alliance for Health, 11 bikes were donated to Old Cahawba last spring for residents to enjoy.

And as a way to kick off the season, Matthews said a special bike tour would be hosted at Old Cahawba on Saturday, March 30 from 10 a.m. to noon. Matthews said residents are encouraged to bring their own bicycles but if they don’t have one, they can put one on reserve.

“It’ll be BYOB, bring your own bicycle,” Matthews said. “The tour will go through the trails of Old Cahawba and we’ll make frequent stops so residents can learn about the rise and fall of Cahawba.”

“We actually have about 15 bikes now,” Bergstresser said. “They’re all cleaned up and ready to be used.”

The bicycles are available for use any time between noon and 5 p.m. daily. Bergstresser said residents and visitors are welcome to use them on the more than five miles of trails Old Cahawba offers.

“For people who live in Dallas County, I’m sure they’ve been to Cahawba lots of times, but they’ve probably just stayed in their vehicle,” Matthews said. “This is a chance to come down and get some exercise while learning about the history of Old Cahawba. Everyone who has done it has really seemed to enjoy themselves.”

More than 27,000 Alabama residents are expected to be diagnosed with cancer in 2013, and for many of them simply... read more