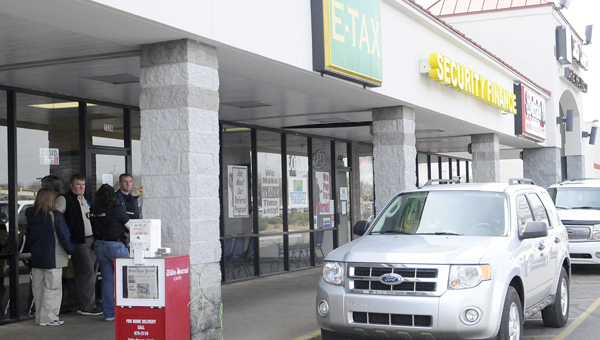 Law enforcement officials stand outside the door of E-Tax on Highland Avenue Thursday afternoon. The IRS confirmed it had conducted operations at two tax preparation locations in Selma, removing documents from each.

Traffic slowed in the parking lot of Winn-Dixie on Highland Avenue when the IRS showed up at one business’ door Thursday afternoon. Shopping center patrons watched as boxes were taken from E-Tax and loaded into vehicles.

The IRS also confiscated items under a search warrant from Money Tax on Broad Street.

A special agent for the IRS, Dawn Kirkpatrick, confirmed the IRS conducted a search and obtained a warrant, “based on what we have on their filing history.”

No one was taken into custody and no charges were filed as it was just an investigation, but Kirkpatrick said the specifics cannot yet be released as to why the IRS conducted an investigation there because, she said, the affidavit for the search warrant is under seal at this time.

When the document will become public is not yet known.

She explained Thursday’s investigation in Selma were part of what the IRS does on a regular basis.

“We investigate return preparers and we just want to protect the tax that the American people pay in,” Kirkpatrick said.

In a typical investigates she explained the IRS collects and investigations from current year filings as well as several years back.

“We do some type of investigation before we ever get to this point,” Kirkpatrick said. “We have to be sure of what we are doing, and then we have to have probable cause to go in and do the search warrant based on if they have conducted some kind of criminal act.”

As for what types of things they look for during investigations such as the one on Highland Avenue, she said they look at, “what types of returns they are filing, whether or not their returns have a high refund rate and what kinds of deductions they are taking on the returns.”

Though the Selma Police Department got multiple calls from residents asking questions about the IRS’ appearance at the two tax preparation locations, Chief William T. Riley told the Selma City Council in Thursday’s work session that his department was, “not involved in that, it was the IRS and their people.”

Riley said he believed those two locations have temporarily closed their doors.