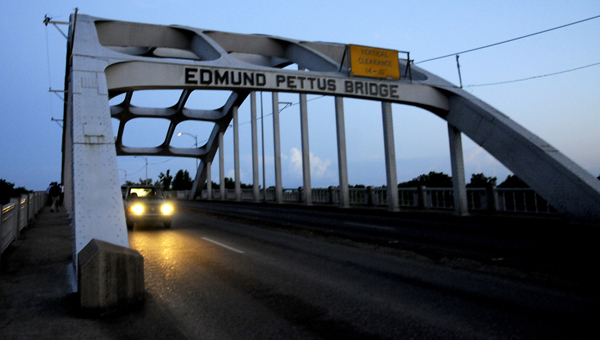 The Department of the Interior and the National Parks Service announced Monday the Edmund Pettus Bridge in Selma had been added to the list of national historic landmarks. — File photo

WASHINGTON — Secretary of the Interior Ken Salazar and Director of the National Park Service Director Jonathan B. Jarvis announced Monday the designation of 13 new national historic landmarks, including the Edmund Pettus Bridge, the iconic bridge so central in the civil rights movement and the site of “Bloody Sunday.”

“These national historic landmark designations span more than two centuries of our country’s history, from 17th century architecture to a Civil War battlefield to a 19th century-Kentucky whiskey distillery that continued to operate through the Prohibition era” Salazar said. “Today’s designations include significant sites that help tell the story of America and the contributions that all people from all walks of life have made as we strive for a more perfect union.”

National historic landmarks are nationally significant historic places that possess exceptional value or quality in illustrating or interpreting the heritage of the United States. The program, established in 1935, is administered by the National Park Service on behalf of the Secretary of the Interior. Currently there are 2,540 designated national historic landmarks.

“From the Civil War to civil rights, to the struggles and accomplishments of women, African Americans and Latinos, these sites highlight the mosaic of our nation’s historic past,” said Director Jarvis. “We are proud to administer the National Historic Landmarks Program to educate and inspire Americans through their country’s rich and complex history.”

In announcing the Edmund Pettus Bridge as one of the new landmarks, the Department of the Interior and the National Park Service released this description of “Bloody Sunday” and the bridge’s historic significance.

“Edmund Pettus Bridge, Selma, Ala. — On March 7, 1965, civil rights marchers drawing attention to the need for voting rights legislation were attacked by law enforcement officials as they crossed the Edmund Pettus Bridge.  The attack, which came to be known as “Bloody Sunday,” contributed to the introduction and passage of the Voting Rights Act of 1965, considered to be the single most effective piece of civil rights legislation ever passed by the US Congress.”